As farmers demand action against Union MoS Ajay Misra, UP police has filed a complaint against him and his son Ashish on Sunday, amid eight deaths in Lakhimpur 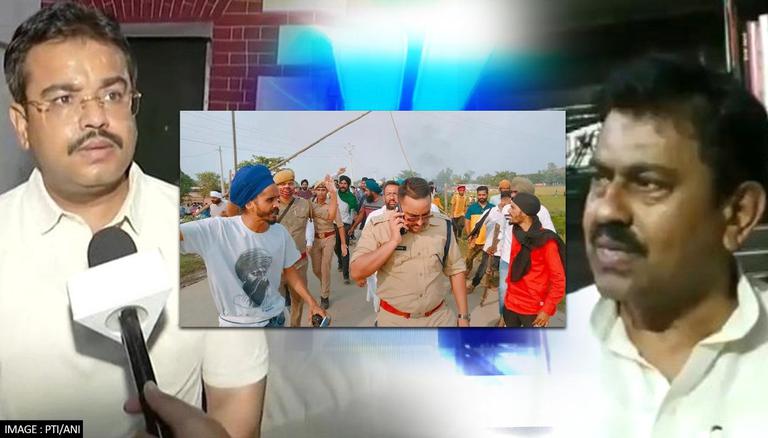 
As farmers demand action against Union MoS Ajay Misra, UP police has filed a complaint against him and his son Ashish Misra on Sunday, amid eight deaths in the Lakhimpur violence. Farmers have issued a set of demands to the police - dismissal of MoS Home AK Mishra, registering FIR, ex gratia, govt jobs to victims' kin and judicial probe. UP police has stated that the demands have been forwarded to higher authorities and talks with farmers will be held later.

I've received a memorandum (from farmers), demanding dismissal of MoS Home (AK Mishra), registration of FIR based on their complaint, payment of ex gratia & govt jobs to the family of the deceased & judicial probe into yesterday’s incident: Lakhimpur Kheri DM AK Chaurasiya pic.twitter.com/HkRfzVt2Tm

Alleging that violence was started by farmers, Union MoS Ajay Misra said, "Our party workers were coming to receive the Deputy CM when they were attacked by rowdy elements among farmers. They threw stones at the cars after which they stopped. Thereafter, they were forcefully dragged from the cars and were beaten. 3 workers and our driver were killed. They burnt our car and pushed it from the road."

His son Ashish Misra denied being there on-site saying, "I was at Banbirpur since 9 AM till the end of the event. Allegations against me are completely baseless. I demand judicial inquiry of this matter and culprits should get punished".

SKM has demanded Union MOS Ajay Kumar Mishra be removed from his post immediately and his son should be booked for murder along with his supporters. Moreover, SKM has sought a SC judge-monitored probe into the incident as UP CM Yogi Adityanath assured that his government will investigate it. BKU leader Rakesh Tikait has reached Lakhimpur to decide future course of action for the farmers' protest.

In the aftermath of the violence, section 144 has been imposed in Lakhimpur and entry of politicians has been banned. Several politicians like Priyanka Gandhi Vadra, Deepender Hooda (Congress), Sanjay Singh (AAP) and Chandrashekhar Azad (Bhim Army) have been detained enroute to Lakhimpur. Moreover, top Opposition leaders in UP - Samajwadi party chief Akhilesh Yadav, BSP state chief Satish Mishra, Congress leaders Pramod Tiwari and Salman Khurshid have been placed under house arrest while Punjab Dy CM Sukhjinder Singh Randhawa and Chhattisgarh CM Bhupesh Baghel have been denied permission to land at Lucknow airport.