Chief Minister of West Bengal Mamata Banerjee has written a poem against the CAA, NRC and posted it on her party Trinamool Congress' social media handles

In the wake of the Citizenship Amendment Act (CAA) been passed in both the Houses of Parliament and assented by the President of India Ram Nath Kovind, Chief Minister of West Bengal Mamata Banerjee has written a poem against the CAA and National Register of Citizens (NRC) and posted it on her party TMC's social media handles.

Didi writes poem on the rights of the people

The Poem titled 'Our Right' 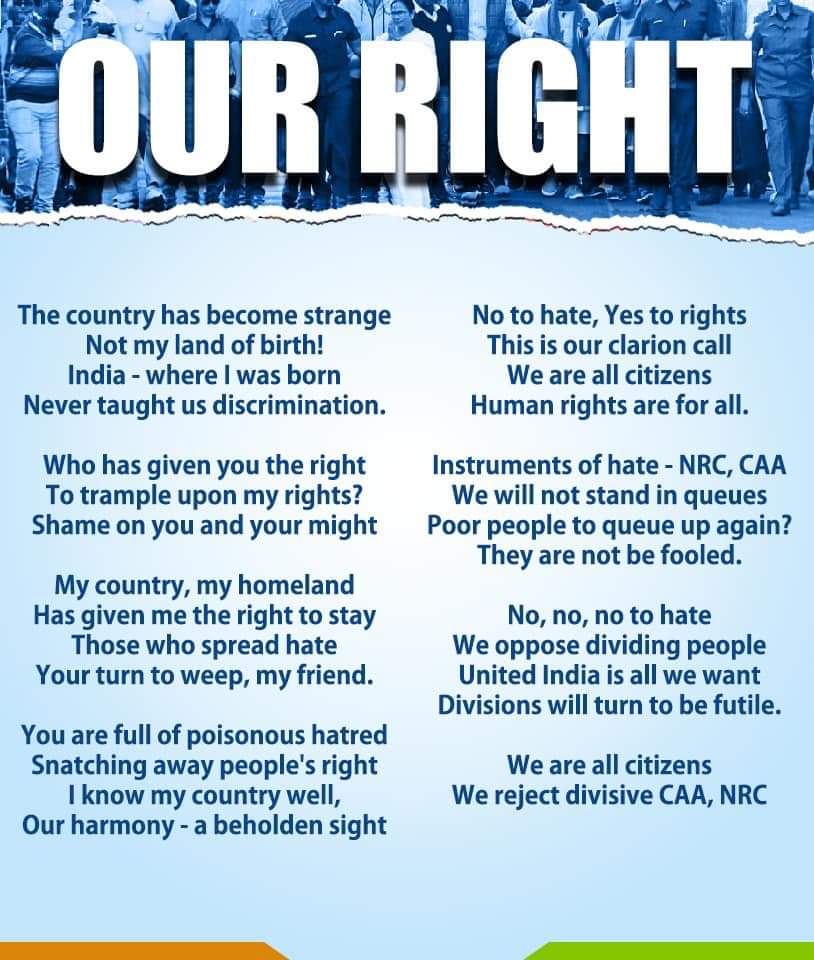 READ | Rallies For And Against CAA, NRC Held In Mumbai

Mamata Banerjee has been leading protests against the NRC and the CAA for the last few weeks. She has led quite a few protest marches and has given speech after speech to put forward the points about what she claims the unjust nature of the NRC and CAA. She has also called for all opposition parties across the nation to come together against the CAA and the NRC.

The West Bengal government led by Mamata Banerjee has stalled the preparation and updation of the National Population Register (NPR) process amid the protests against the Citizenship Amendment Act. Banerjee has vociferously said 'No CAA No NRC' in West Bengal. She has written to several Opposition leaders for joint opposition to the Act. She has also suggested a UN-monitored referendum on the issue and has maintained that NRC and CAA will never be implemented in Bengal.

Mamata Banerjee has been among the leaders to voice out strong dissent against the Delhi police action against the protestors from Delhi's Jamia Millia University, Jawaharlal Nehru University and Uttar Pradesh's Aligarh Muslim University where the protests turned violent with incidents of stone-pelting and damaging public property.

The CAA grants citizenship to Hindus, Sikhs, Jains, Parsis, Buddhists and Christians fleeing religious persecution from Pakistan, Afghanistan, and Bangladesh and who came to India on or before December 31, 2014. The act does not include granting citizenship to Muslims from the three countries as they are the majority there and the Act is about giving citizenship to religious minorities suffering persecution.

The NRC is an official record of those who are legal Indian citizens. It includes demographic information about all those individuals who qualify as citizens of India as per the Citizenship Act, 1955. The register was first prepared after the 1951 Census of India and since then it has not been updated until recently.