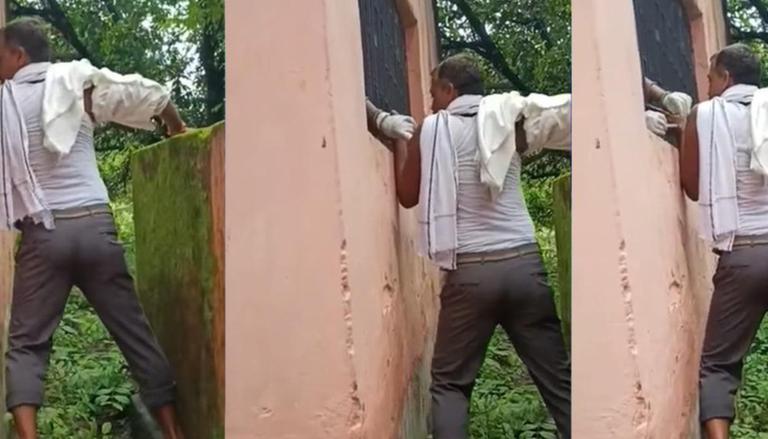 
As the COVID vaccination drive continues to thrive, people have registered themselves to the Government-sanctioned Cowin app. While many wait for their turns to get the jabs, many have opted for several innovative ways to get themselves vaccinated. In one such attempt, a "jugadu" man bet the long queue outside the vaccination center and got his jab through a window. The undated video, uploaded on Facebook two days ago, has gone viral.

The 15-second video of a man hanging against the wall to get his COVID jab has gone viral within hours after it was shared on social media. The video was shared on Facebook by a user named Tarun Tyagi, which showed the man pulled up his shirt sleeves and rolled it above his arm to enable the vaccinator to administer the jab from the back window of the center. Tricky indeed!

Take a look at the viral video.

The video begins with the man in grey trousers and a white vest carefully balancing his foot on the edge of the wall. He stood there with his sleeves rolled up. The healthcare worker stretched out his rubber-gloved hands and pushed the vaccine into the man's arms. Towards the end of the video, the camera pans to show the viewers the long queue outside the COVID vaccine center that the 'jugadu' man battled with.

The video was uploaded by Tyagi with a Hindi caption. "Apasdari aur setting to humare sesh ki shaan Hain, (mutual understanding and management skills are the dominating skills of our country" Tyagi boasted jokingly. The video garnered over 4.7 lakh views since it was uploaded on August 14. It also amassed over 2500 reactions.

While many lauded the man's ability to make arrangements, others warned off against taking such risks. "Setting Dekho bande ki, (look at the management skills of the guy)" one user wrote. "It is the most unhygienic way to secure from virus," wrote another. A user named Ranjan Gupta also claimed that the video was from Bihar's Samastipur district. Although, there's no proof of authenticity of the claim.