PDP chief Mehbooba Mufti sparked a row for the umpteenth time by slamming the anti-terror crackdown in J&K and warning the Centre of "dire consequences". 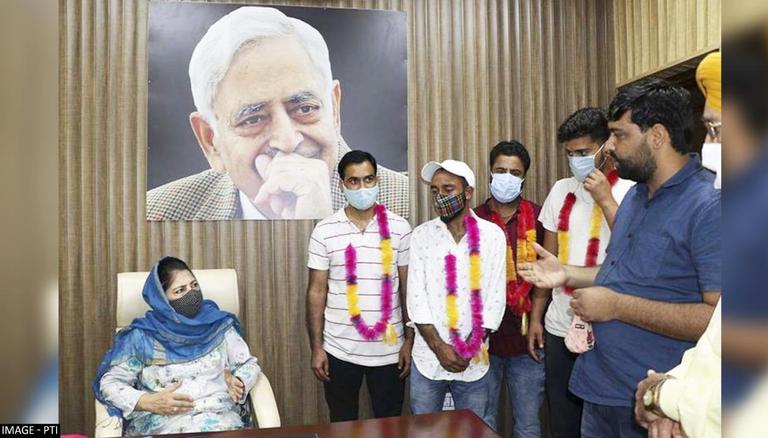 
PDP chief Mehbooba Mufti sparked a row for the umpteenth time by slamming the anti-terror crackdown in Jammu and Kashmir and warning the Centre of "dire consequences". Speaking to the media on Tuesday, she argued that the targeting killings of minorities in the Union Territory was a failure of the government. According to her, 700 civilians had been taken into custody in this context without any credible evidence in order to absolve the authorities of their responsibility.

Former J&K CM Mehbooba Mufti remarked, "I had an inkling from the start that the government will perpetuate injustice to cover up its failure to prevent the incidents in which a Kashmiri Pandit brother and a Sikh girl were killed. Arrests have started. Hundreds of people are being taken into custody. There is no evidence against them. I want to know the names of those arrested, where they hailed from, what is their crime and what is the evidence against them. If they keep on arresting people like this, I want to tell them- there will be dire repercussions. And perhaps we will all have to suffer the consequences."

Taking to Twitter later, she claimed, "J&K administration had prior information about attacks on minorities. Yet, they chose to ignore these inputs. Instead, they were busy providing security to Union Ministers who were brought to Kashmir to amplify BJPs fake narrative and propaganda of so-called normalcy in J&K". Moreover, Mufti alleged that the Centre was resorting to "collective punishment" in a bid to resolve problems in the Union Territory.

The recent killings (in Kashmir) are saddening...It is govt failure. As a cover-up, govt is arresting people without evidence. If they keep arresting repercussions will be dangerous, everyone will have to pay the price: PDP leader Mehbooba Mufti pic.twitter.com/oZwZV9zx50

Targeting killings rocked J&K last week after terrorists killed Makhan Lal Bindroo who owned a popular pharmacy in Srinagar's Iqbal Park on October 5. On the same day, Virender Paswan, a street food vendor hailing from Bhagalpur in Bihar and Mohammad Shafi, a taxi driver were also shot dead by terrorists. This was followed by another gruesome incident on Thursday when Supinder Kaur, the principal of the Government Boys Higher Secondary School in Srinagar and teacher Deepak Chand were gunned down.

The security forces have intensified their crackdown against The Resistance Front- a shadow outfit of Pakistan-based terror group Lashkar-e-Taiba has claimed responsibility for the killings. On Tuesday, the NIA NIA conducted raids at 16 locations in the Kashmir valley in connection with the terror attacks in J&K and other major cities by the cadres of terrorist organizations such as TRF, LeT and Hizbul Mujahideen. IGP Kashmir Vijay Kumar has stated that 7 out of 28 civilians killed by terrorists in 2021 belonged to the Hindu and Sikh communities.