Days after Republic TV confirmed Mehul Choksi’s presence in Antigua and Barbuda, the absconding businessman has now approached the Antigua High court in an attempt to block extradition to India.

Days after Republic TV confirmed Mehul Choksi’s presence in Antigua and Barbuda, the absconding businessman has now approached the Antigua High court in an attempt to block extradition to India.

HERE’S THE INSIDE TRACK OF INDIAN ENVOY’S MEET WITH THE ANTIGUAN PM:

"In the discussion, PM Browne highlighted the excellent relations which currently exist between India and Antigua and Barbuda, and mentioned the US$ 1 million donated to the Barbuda rebuilding effort by India. He also mentioned discussions he has held with India’s PM Narendra Modi at the Commonwealth Heads of Government Summit in London in April, demonstrating the close ties between both countries," said the statement. 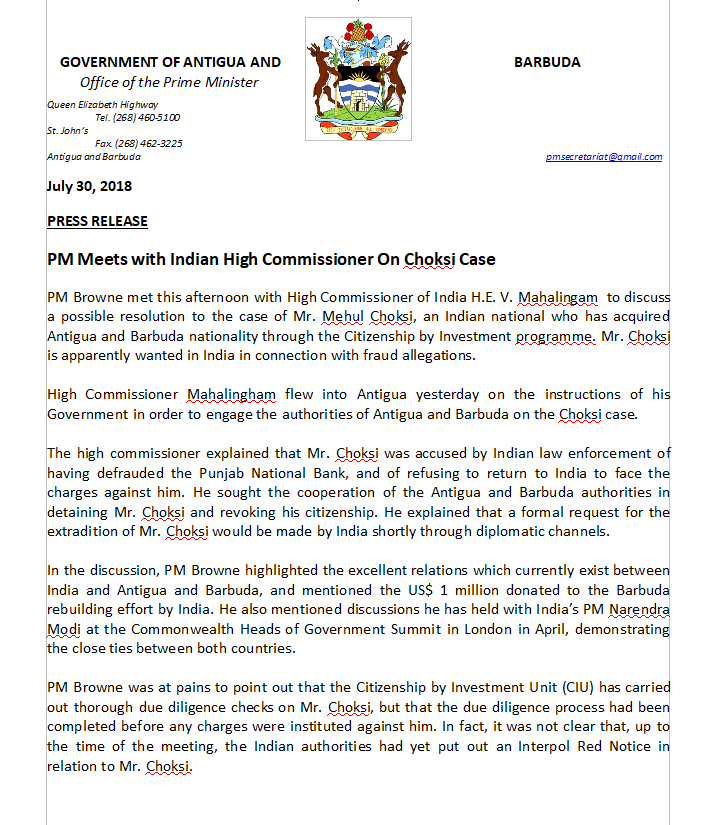 The statement also said the due diligence process for granting citizenship to Mehul Choksi was completed before any charges were instituted against him.

"PM Browne was at pains to point out that the Citizenship by Investment Unit (CIU) has carried out thorough due diligence checks on Mr. Choksi, but that the due diligence process had been completed before any charges were instituted against him. In fact, it was not clear that, up to the time of the meeting, the Indian authorities had yet put out an Interpol Red Notice in relation to Mr. Choksi," read the statement.

Now, Mehul Choksi has approached the Antigua Court to block extradition to India in advance. Mehul Choksi’s lawyer,Dr. David Dorsette, filed a case in the High Court of Antigua on Monday seeking to block the extradition of his client.

He is asking for a declaration from the Court that Choksi is, by virtue of Section 119.1 of the Constitution a citizen of Antigua and Barbuda; and that no lawful basis exists for the extradition of Choksi under Section 5 of the 1993 Extradition Act.

Earlier, Republic TV spoke to Antigua PM Gaston Browne who had confirmed Mehul Choksi's presence in the country and also elaborated on the notices issued regarding the absconding fraudster and the circumstances behind his citizenship application.