Jignesh Mewani has launched an attack on Defence Minister Rajnath Singh in a mocking tweet for the latter's Shastra Puja ceremony on the Rafale Fighter Jet in France. Attaching some pictures of the Rafale's Shastra Puja, Mewani tweeted, "India's Constitution tells that it is our duty to promote scientific temper in society. This how Hon’ble @rajnathsingh is implementing the Indian constitution. Our future generations shall remain obliged to such phenomenal creatures." 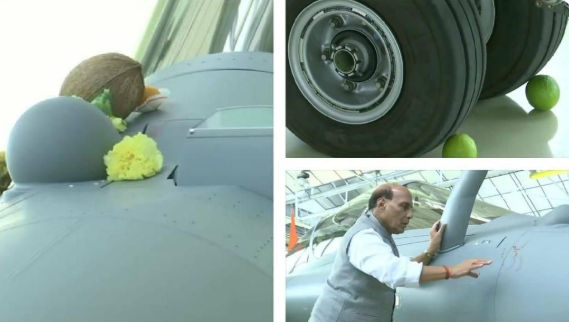 Congress' Sandeep Dikshit also expressed his dissent stating that the whole religious context of Vijayadashmi and the Rafale aircraft doesn't match. "It is a festival that all of us celebrate. Why do we have to link it with the coming of an aircraft?", said Dikshit.

Defence Minister Rajnath Singh received India's first Rafale combat aircraft, out of the 36 fighter jets ordered as part of the deal between India and France, on behalf of the IAF on Tuesday. Rajnath Singh travelled from Paris to Mérignac, and speaking from the Merignac Air Base, he said, "Today is truly a historic day for the Indian forces and this ceremony shows the depth of the strategic partnership in the relations of India and France." After officially receiving the aircraft, the Defence Minister also undertook a 25-minute sortie from the Merignac airbase in France.