Nationalist Congress Party (NCP) chief Sharad Pawar called it a political witchhunt when Enforcement Directorate (ED) named him as an accused in the Rs 25,000 crore Maharashtra State Cooperative Bank (MSC Bank) scam case. The ECIR (equivalent to FIR) was registered after Mumbai Police EOW (Economic Offences Wing) filed an FIR, making it a predicate offence for the ED. Top sources in the ED confirmed to Republic TV that Pawar senior was named by the witness in the case paving way for the agency to name him as an accused. Republic TV has now accessed the 67-page statement of the witness. ED has heavily relied on the statement to register an ECIR in this case.

Sharad Pawar named by witness on page 11 of the statement.

“The then Sugar Commissioners and the then state government, more particularly the co-operative minister, the members of the Mantri Samiti responsible for taking decisions with regards to the setting up of new Cooperative Sugar Factories (CSFs) and proper management of the CSFs, had failed to take action against erring managements.”

“This mismanagement was not inadvertent but pre-planned and schemed, as the persons in the state government, the persons at the helm of affairs of the financial institutions and the persons on the Board of Directors of CSFs were the same people, all set to tear apart the cooperative sector to fill their treasuries, under the implicit direction of Shri Sharad Pawar, who was holding the reigns of all the pillars of the cooperative sector in Maharashtra.” 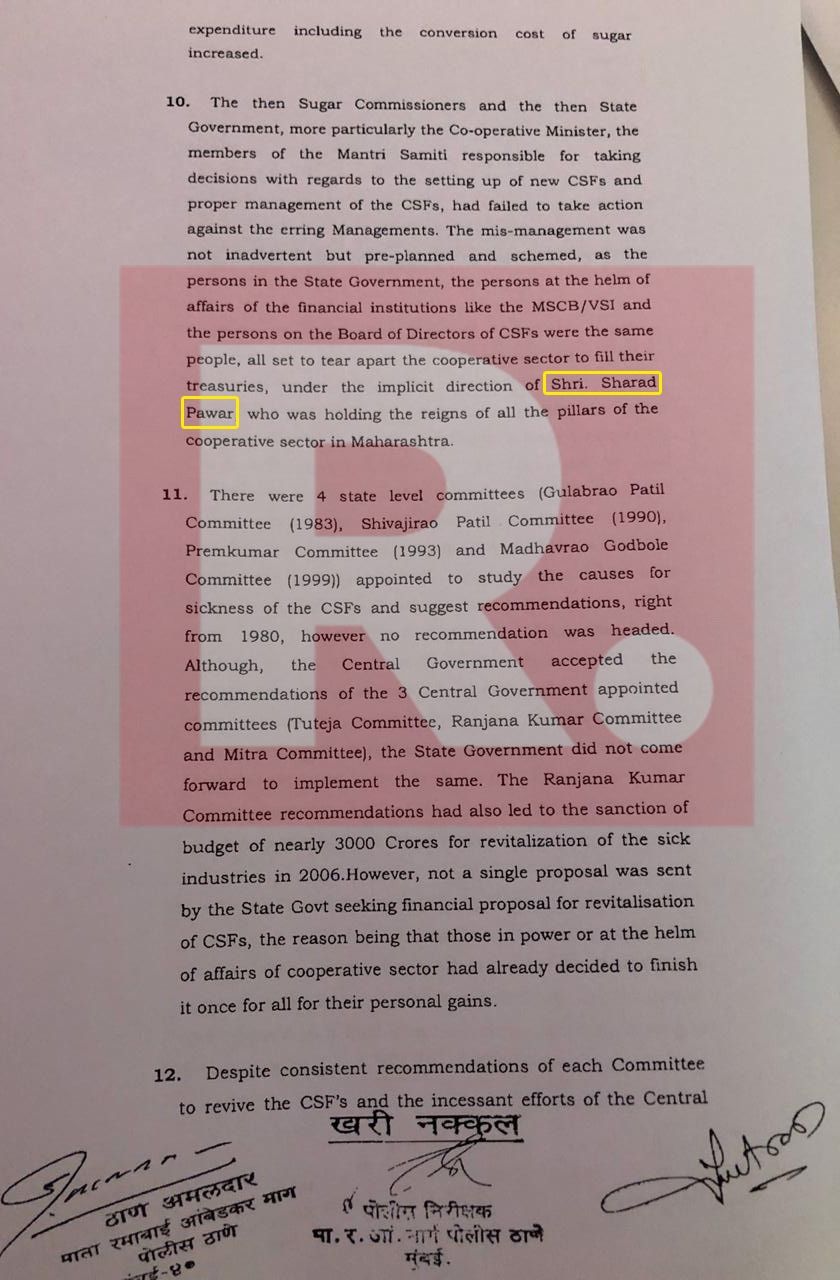 READ | Sharad Pawar clueless on why Ajit quit as MLA, says no feud in family

“The directors of the MSC Bank have misused their position and power and acted hand in gloves with each other in order to dupe the money of the bank by giving loans to their near and dear ones, without securing any charge over the properties of the borrowing units.”

The witness also alleged that private companies were illegally given loans without securing any charge at subsidized interest rates, whose loans were restructured, solely because some of the directors of the board had financial or personal interest.”

It is important to note that Ajit Pawar was one of the directors in the bank.

What is the MSC Bank scam case?

The Rs 25,000 crore scam involves the allegations that the then top executives i.e. chairman, MDs, directors, CEOs, managerial staff of Maharashtra State Cooperative Bank (MSC) and office bearers and directors of Shakhar Karkhanas (cooperative sugar factories), Soot Girnis and other processing units were given loans in a fraudulent manner by MSC bank. It has been alleged that in the process of loan sanctions, several illegalities were committed.

As per the probe agency, loans were provided to cooperative bank sugar factories by the officials of the MSC bank who have connections with the owners of sugar factories. In the process, several irregularities in the sanctioning of loans came into the light, only with purpose of extending benefits to the directors of the lending bank, for personal gains thereby defrauding in cheating the bank and its shareholders.