The video shared by Nirmala Sitharaman and Anand Mahindra shows a folk artist seeking alms with his decorated old OX and a QR code scanner on his head. 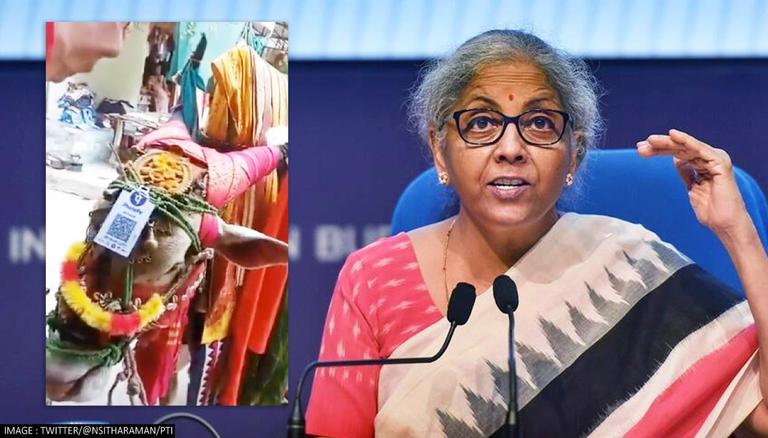 
As India undergoes a massive digital revolution, financial transactions have largely gone digital and further digital payments have also increased at a tremendous level across the country. This has become easier ever since people started owning a smartphone. It enables a person to use digital payment modes for transactions with the help of applications like Google Pay, Paytm, Phone Pe, and others. However, a recent video suggests that not just humans, digitalisation has also affected animals.

A video recently shared by Union Finance Minister Nirmala Sitharaman shows a QR code scanner on the head of a decorated ox, used for receiving alms or for making payments by the public. While sharing the 30 seconds video on her official Twitter handle, Sitharaman wrote, "Received a video of a Gangireddulata, where alms are given thru a QR code! India’s #digitalpayment revolution, reaching folk artists. In AP + Telangana, Gangireddulavallu dresses up old oxen no longer helpful on farms, walk door to door during fests, performing with their nadaswarams."

Recd a video of a Gangireddulata, where alms are given thru a QR code! India’s #digitalpayment revolution, reaching folk artists. In AP + Telangana, Gangireddulavallu dress up old oxen no longer helpful on farms, walk door to door during fests, performing with their nadaswarams pic.twitter.com/8rgAsRBP5v

The incident is from Andhra Pradesh where a Gangireddulavallu or a folk artist has dressed his old ox and is visiting door to door for collecting alms. The video shows a man scanning the Phone Pe QR code provided on the head of the decorated ox and making a payment. Apart from the Union Finance Minister, business tycoon, Anand Mahindra also shared the video and wrote, "Do you need any more evidence of the large-scale conversion to digital payments in India?!"

In states like Andhra Pradesh and Telangana, it is an old tradition where folk artists decorate their old bulls playing nadaswaram. They go from one house to another and shop-to-shop visit to collect alms during the festival season. The people are majorly seen visiting houses during the Sankranti festival as they receive clothes, food, and money from people. Apart from that, the bulls are also trained to dance for collecting more money.