After Shri Rashtriya Rajput Karni Sena wrote a letter to Union Minister for Information and Broadcasting Prakash Javadekar over certain content being aired on the popular show Bigg Boss, #BanBigBoss is trending on Twitter. The hashtag is one of the top Twitter trends and seems to have clearly created a buzz around the issue. The conversation surrounding the demand for the show's ban which is hosted by Salman Khan has two clear sides - one supporting the call for ban, the other opposing the call for the show's ban.

Below is a screenshot when #BanBiggBoss emerged as a top trend 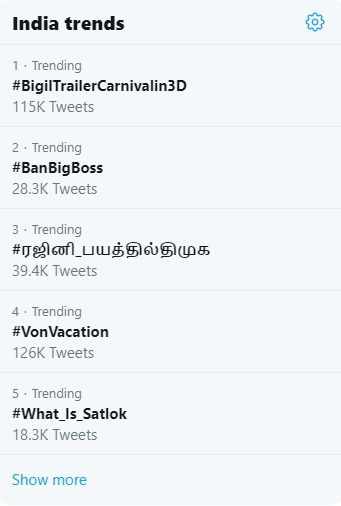 The tweets in #BanBiggBoss are mostly supporting the call for ban of the show Bigg Boss. Many are also demanding the blocking of the channel which airs the show. Several netizens urged their followers to write to the I&B ministry complaining against the kind of content being played on the show. Since Big Boss is a show played in other regional language, fans of the shows in its other avatars also joined in the conversation; but most against the ban were fans of the shows and its cast.

#BanBigBoss really people should not watch bigboss, media can do anything for TRP, we should ban such channels

What is the need of bigboss?#BanBigboss
What about the issue around us in Tamil Nadu?
Start to think about issues friends, brother's and sisters. Stop getting distracted by #BiggBoss3

Shri Rashtriya Rajput Karni Sena on October 9, addressed a letter to Prakash Javdekar, Minister of Information and Broadcasting, saying that Salman Khan's show Bigg Boss is promoting and insulting Hindu traditions. The letter refers to a clip from the show involving contestants from different religions, and goes on to tender an opinion on pre-marital relations. "Under the Hindu act, I request the government to immediately ban the show because it is being telecasted on national TV. Bigg Boss show has totally ruined the Indian culture," the letter says.