PM Modi Encourages Use Of Indigenous Products, In His 'Mann Ki Baat' Address

Prime Minister Narendra Modi in his 'Mann ki Baat' speech on Sunday spoke about Mahatma Gandhi's swadeshi spirit that ignited the lives of lakhs of Indians. Motivating the people toward's Mahatma Gandhi's idea of Swadeshi, PM Modi encouraged the people to become self-dependent by buying Swadeshi products. He added that this Swadeshi light will bring prosperity to the people of India.

Let us light the lamp of prosperity in the lives of fellow Indians, as per the wishes of beloved Bapu. #MannKiBaat pic.twitter.com/U1rHIFO18C

PM Modi encouraged the use of indigenous products

In his 'Mann ki Baat' speech, the Prime Minister urged the people to purchase and use local products that are crafted in the country. He invited the people to become a medium to bring prosperity to our countrymen by investing in and buying Indian products. Taking inspiration from the teachings of Mahatma Gandhi, PM Modi said that Gandhi held a mass movement with an aim to encourage Indian products and to become independent from foreign products.

The Prime Minister encouraged the youth of India to create awareness and motivate their fellows to adopt indigenous products, until 2020, as we will complete 75 years of independence. He asked the youngsters to come forward, create small organisations, and make a decision to go local. PM Modi underlined the importance of becoming self-dependent and leading a more dignified life.

PM Narendra Modi tweeted about his message on the principles and teachings of Mahatma Gandhi that promotes the Swadeshi spirit and use of Swadeshi products. He said that Mahatma Gandhi has shown us the path to lead a self-dependent life. 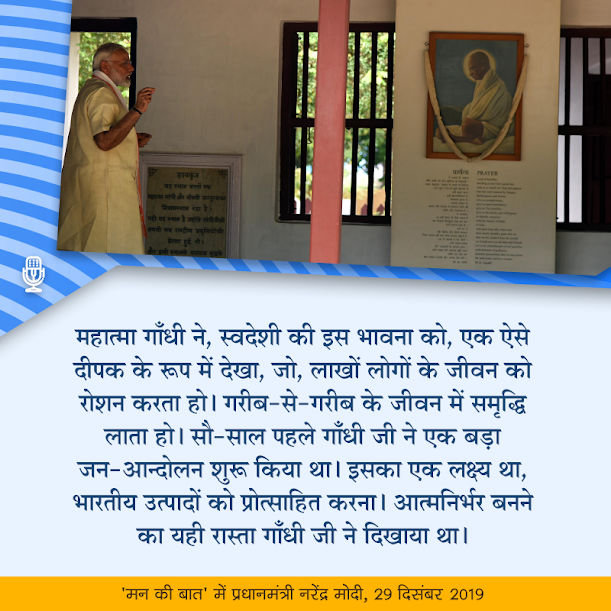 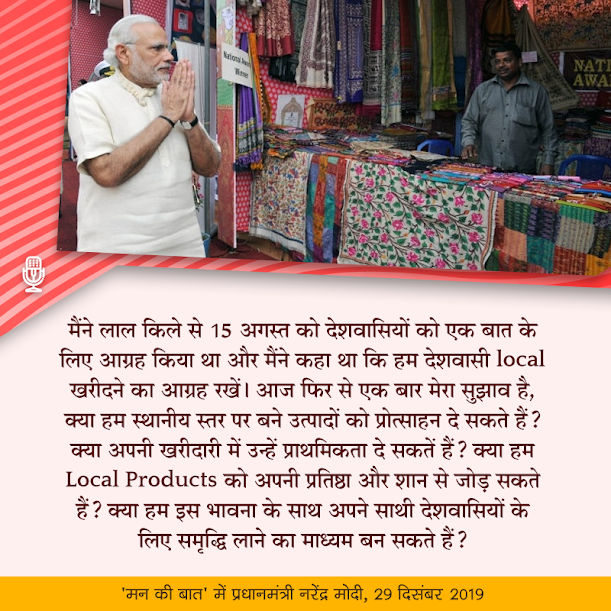