PM Modi Pays Tribute To Arun Jaitley, Says He Was A 'political Giant'

Former Finance Minister Arun Jaitley has passed away on Saturday, August 24, 2019 after being admitted to AIIMS in New Delhi on August 9, the hospital has announced in a statement. The AIIMS issued a statement informing about his demise on Saturday. On the day Arun Jaitely had been admitted to AIIMS, the hospital had issued a statement saying that he was being given treatment in the ICU under a multidisciplinary team of doctors, and that at that point he was haemo dynamically stable. Arun Jaitely unfortunate demise marks the end of an extraordinary career that has witnessed him holding incredibly important positions at various levels, both in the government and outside. 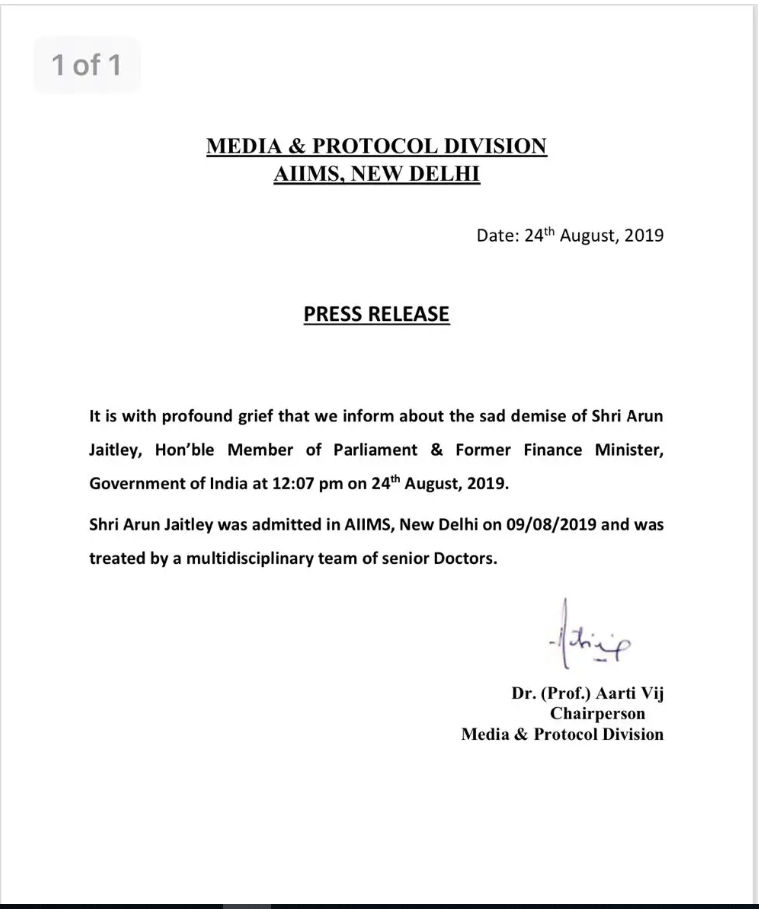 Arun Jaitley Ji was a political giant, towering intellectual and legal luminary. He was an articulate leader who made a lasting contribution to India. His passing away is very saddening. Spoke to his wife Sangeeta Ji as well as son Rohan, and expressed condolences. Om Shanti.

READ | Arun Jaitley passes away: A look back at his glorious political career

About the senior BJP leader

The senior BJP leader, who held the portfolios of Finance and Corporate Affairs for the entirety of the first Narendra Modi-led NDA government, had earlier opted out of the second Modi government that was sworn-in in May, citing health grounds. He had, however, voiced that he would continue to serve the government and his party in what capacity he could.Arun Jaitley’s political career spanned multiple decades and tenures. In the Atal Bihari Vajpayee-led government, Mr Jaitley held the portfolios of Information and Broadcasting while simultaneously holding Independent Charge of the Department of Disinvestment and going on to hold the Ministry of Law, Justice and Company Affairs and then the Ministry of Shipping.