The unveiling of the statue will be live-streamed at the 12 jyotirlingas, four Shankaracharya mutts, his birthplace, and 86 prominent temples. 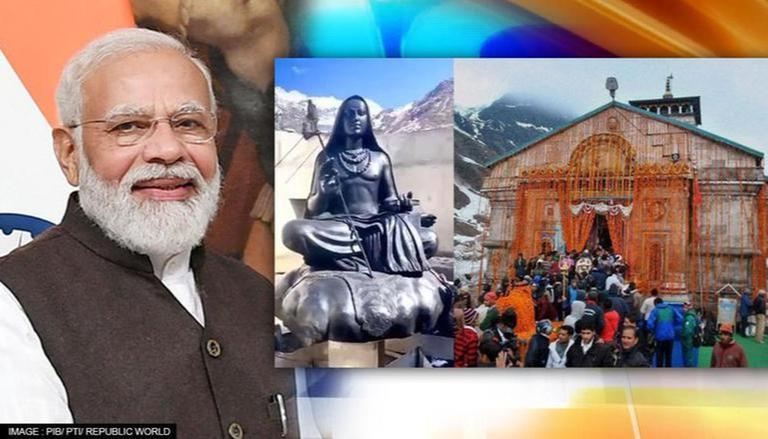 
Prime Minister Narendra Modi will visit Kedarnath and offer prayers at the temple in Uttarakhand today, November 5. He will inaugurate the rebuilt samadhi of one of the most revered Hindu sages, Shri Adi Shankaracharya, and also unveil his statue. PM Modi will also inaugurate Rs 130 crore worth of infrastructure projects.

The Prime Minister will arrive at the temple shrine at 8:00 am and will offer prayers to the Kedarnath Baba. He then will inaugurate Adi Guru Shankaracharya Samadhi Sthal at 8.35 am. The samadhi has been reconstructed as it was damaged during the 2013 floods. The unveiling of the statue will be live-streamed at the 12 jyotirlingas, four Shankaracharya mutts, his birthplace, and 86 prominent temples. In addition, PM Modi will inspect the reconstruction works.

PM Modi will also lay the foundation stone for various development projects at around 9.45 am in Kedarnath, completed at a cost of Rs 130 crore.

He will address a rally and lay the foundation stone for multiple projects worth over Rs 130 crore, in the poll-bound state of Uttarakhand. Some of the projects to be inaugurated by the Prime Minister include the redevelopment of Sangam ghat, first-aid and tourist facilitation Centre, administration office and hospital, two guest houses, police station, command, and control Centre, Mandakini aasthapath queue management and rain shelter, and Saraswati civic amenity building.

The PMO in a statement mentioned that the reconstruction of the samadhi was undertaken under Modi's guidance who has constantly reviewed and monitored its progress.

Pushkar Singh Dhami told Republic, "The country knows that PM Modi is a great devotee of Kedar Baba and he holds a deep connection with the land and the people of the region".

He added the under the leadership of PM Modi many schemes have been successfully implemented and many more programmes will be initiated by him for the welfare of the state.

Also, the Bharatiya Janata Party (BJP) has invited sadhus and devotees to be part of the celebrations.