In a massive development, President Ram Nath Kovind on Monday has nominated former Chief Justice of India Ranjan Gogoi to the Rajya Sabha, according to gazette

In a massive development, President Ram Nath Kovind on Monday has nominated former Chief Justice of India Ranjan Gogoi to the Rajya Sabha, according to a notification issued by the Centre. Under clause (1) of Article 80 of the Constitution, the President has nominated the former CJI to fill the vacancy in the Upper house due to the retirement of one of the nominated member. Gogoi had retired from the Supreme Court on November 17 after pronouncing the historic Ayodhya verdict.  While 51 seats in Rajya Sabha are falling vacant in April, five more in June, one in July and 11 in November this year. 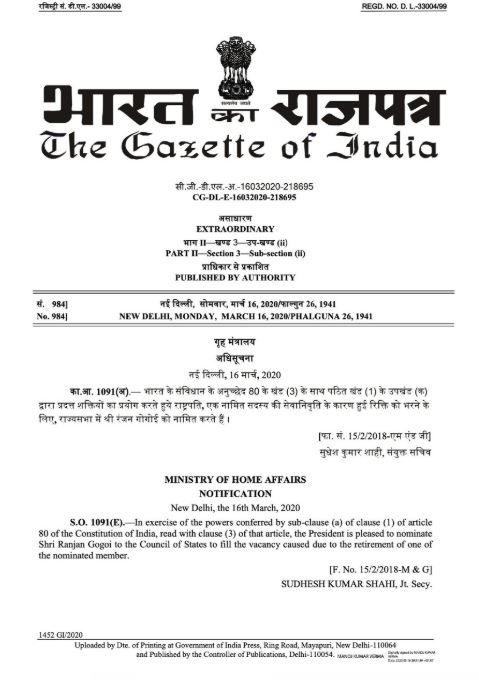 Ranjan Gogoi- 46th Chief Justice of India is the son of former Assam chief minister Kesab Chandra Gogoi and completed his law from Delhi University. At first he enrolled in Gauhati High Court in 1978 practising constitutional, taxation and company matters. He was then transferred to the Punjab and Haryana High Court - where he rose to the post of Chief Justice. Later he was elevated as a judge in the Supreme Court on 23 April 2012 and subsequently succeeded then-CJI Dipak Misra on 3 October 2018.

Prior to his appointment to the top post in the apex court, Gogoi had gained the media spotlight when he particiapted in an unprecedented press conference of Supreme Court judges raising several problems in the judiciary - mainly the allocation of key cases by the CJI - who was the master of the roster. Gogoi along with three other dissenting judges - Justices Kurian Joseph, Madan B Lokur, Justice Chelameswar released a letter they wrote to Misra, conceding that he was the master of the roster but that was "not a recognition of any superior authority, legal or factual of the Chief Justice over his colleagues".

It's a shame that BJP wrecking law for Rajya Sabha polls: Chidambaram