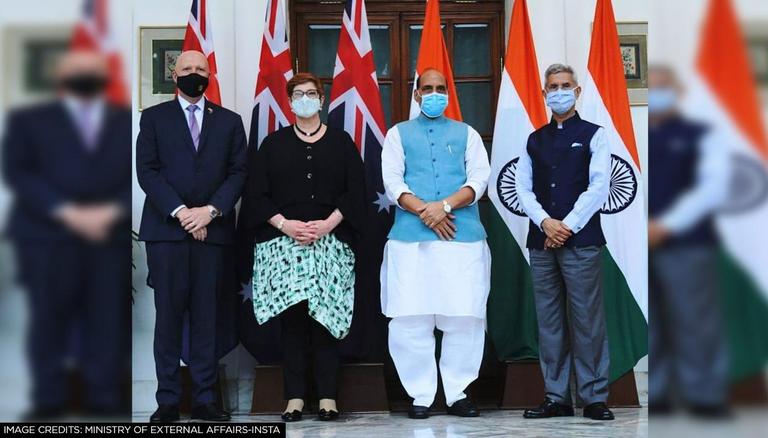 
To discuss the further diplomatic strategy on Afghanistan, India and Australia held the first round of talks on Saturday in a high-level meeting. Union Defence Minister Rajnath Singh, along with External affairs minister S Jaishankar met their Australian Counterparts, Peter Dutton & Marise Payne, in the ‘2+2’ ministerial meet.

In the meeting, the ministers from both nations discussed the geopolitics surrounding Afghanistan and their upcoming diplomatic strategy, along with maritime security in Indo-Pacific, and other issues concerning multilateral cooperation.

Defence Minister Rajnath Singh, while issuing a joint statement after the 2+2 ministerial meet said, "Today we held comprehensive discussions with Minister Payne and Minister Dutton over bilateral and regional issues. We also discussed different institutional frameworks for defence cooperation and cooperation in the fight against the pandemic.”

"We also exchanged views on Afghanistan, maritime security in Indo-Pacific, multilateral cooperation, and other matters," he added.

India shares an important strategic relationship with Australia and the meeting was another effort by both nations to bolster the ties. Asserting the same,  Defence Minister said that “India and Australia share an important partnership. As two democracies, our common interest lies in the peace and prosperity of the entire region," Singh added.

READ | Other than Jammu and Kashmir, no major terror strike in India after Modi took over: Rajnath Singh

In recent years, India and Australia have increased their defence and military cooperation. During an online summit between Prime Minister Narendra Modi and his Australian counterpart Scott Morrison in June last year, India and Australia elevated their ties to a comprehensive strategic partnership and signed a landmark arrangement for reciprocal access to military sites for logistics support.