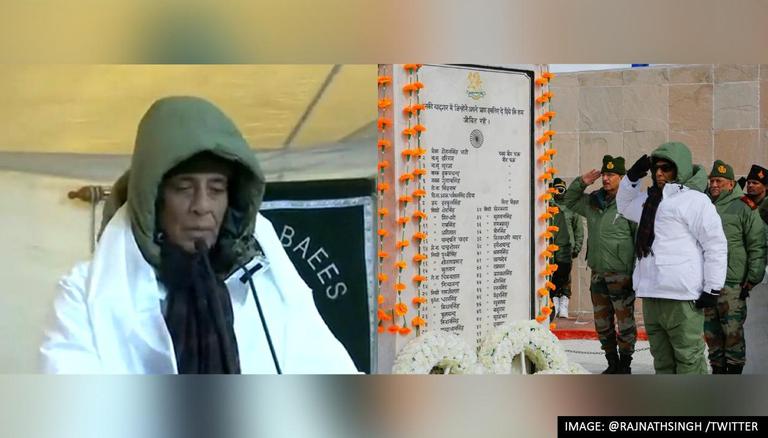 
Defence Minister Rajnath Singh on Thursday inaugurated and paid homage at the revamped Rezang La War Memorial in Ladakh for the troops of the 13 Kumaon regiment that defeated China's People's Liberation Army (PLA) in the 1962 war.

While speaking on this occasion, Rajnath Singh said, "Whatever I saw with my own eyes, my eyes are filled with how 114 soldiers have sacrificed their lives. They were not only brave soldiers but spiritual men because the sacrifice for the country can be given by those who have a big heart."

"This is the character of India that we did not intend to occupy the land of any other country but if any country has raised its eyes towards India, then we have given a befitting reply to it. The brave soldiers of our army are capable of protecting every inch of the land of India. A new war memorial was dedicated in memory of the soldiers who died in this battle. This monument is an example of the determination and indomitable courage displayed by the army at Rezang La, which is not only immortal in the pages of history but also beats in our hearts," the Defence Minister added.

In a stern message to China, the revamped Rezang La memorial was significantly expanded and now has an auditorium and photo gallery to honour the heroes of the 13th Kumaon regiment’s Charlie Company that came under a relentless Chinese assault. The memorial now has the names of the 114 Indian soldiers killed in the battle, engraved on it. The war memorial also has the names of the 20 soldiers who laid down their lives in the Galwan valley clash with China that happened in May 2020.

The original structure was erected in Chushul in 1963 close to the site of the battle. The memorial stands in memory of the brave battle fought by the Indian side led by Major Shaitan Singh, who was awarded a posthumous Param Vir Chakra, India's highest military decoration, for his actions. The renovation of the Rezang La war memorial on the Sino-India border started earlier this year, amid ongoing border tensions with India at the LAC.