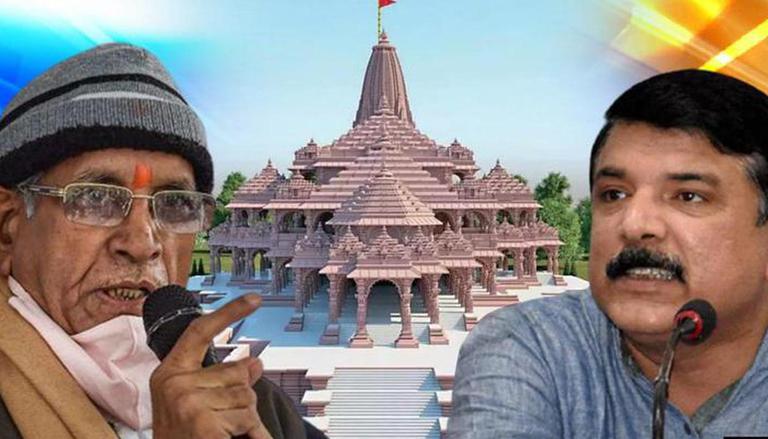 
Two days after land-grabbing allegations were levelled against them, the Ram Janmabhoomi Theerth Kshetra Trust put out 'facts' about the land purchase deal done by the trust at Bagh Bijaisi in Ayodhya on Tuesday. On Sunday, AAP’s Rajya Sabha MP Sanjay Singh and SP's ex-MLA Pawan Pandey had accused the Trust's chief Champat Rai of buying a piece of land worth Rs 2 crore at an inflated price of Rs 18.5 crore for the Ram temple premises with help from Trust's member Anil Mishra.

Issuing a statement containing 'facts' about the land in Ayodhya at Bag Bijaisi near the railway station, the Ram Janmbhoomi Theerth Kshetra Trust noted that the land would be a four-lane road approaching the Ram Mandir in the future and hence described the location of the land as 'prime.'

The statement pointed out that 1.2080 hectares of land were purchased for Rs 1423 per square feet - purportedly much lesser than the actual market rate in Ayodhya - and that agreements for the same land had been made multiple times since 2011 but had reportedly never matured.

Offering more details about the agreements, the Trust said that the Ram Janmabhoomi Nyas was interested to purchase the land but wanted to reportedly finalise the previous agreements so that ownership could be finalised, and informed that nine individuals had been involved in the deal for the last 10 years. The statement further noted that all the nine individuals had been contacted and negotiations were held following which they came together to decide their previous agreements. As per the Trust, it made a final agreement with the owners of the land with 'immediate effect' after the previous agreements were finalised and said that while it was done 'quickly', it was done in a 'transparent manner.'

Clarifying that all its financial deals were made via the online banking channel, the Trust claimed that it had purchased 3-4 plots including Mandirs, Ashrams and noted that it would continue to do so in the future as well. Further, it said that it was the Trust's decision mandating a piece of land (of its choice) to be provided on purchase of temple / Ashram / private property for rehabilitation and that sufficient funds would be provided for the construction of the buildings. It categorically stated that all this was on the record.

On Sunday, AAP’s Rajya Sabha MP Sanjay Singh and SP's ex-MLA Pawan Pandey accused Champat Rai of buying a piece of land worth Rs 2 crore at an inflated price of Rs 18.5 crore for the Ram temple premises with help from Trust's member Anil Mishra. Both the leaders alleged that Rai purchased the land, measuring 1.208 hectares and located in Bag Bjaisi village under Sadar tehsil of Ayodhya district for a price of Rs 18.50 crore from the first purchaser, who had bought it minutes earlier on March 18 this year from its original owners for a sum of Rs two crores. Terming it a case of money laundering, Singh and Pandey both sought a probe by the Central Bureau of Investigation and the Enforcement Directorate into the land purchase for the temple premises.

Singh explained that the land was first purchased by Sultan Ansari on March 18 this year from its original owner Kusum Pathak, wife of Harish Kumar Pathak alias Baba Hardas for a sum of Rs 2 crore. Minutes later, the same land was purchased by Trust chairperson Rai for a sum of Rs 18.50 crore from Ansari, Singh said, again quoting entries of the second sale deed showing the transaction between Ansari and Rai. "How come in five minutes, this proposal was passed and the land was immediately purchased?" he asked. SP’s former Ayodhya MLA Pandey reiterated the same allegation in the temple town.