Tamil Nadu Chief Minister flagged off at least 13 electric and solar-powered cars, which can double up as ambulances & negotiate narrow roads easily.

Amid the trying times of COVID-19 pandemic, Tamil Nadu Chief Minister  Edappadi K Palanisamy flagged off at least 13 electric and solar-powered cars that have been manufactured by M Auto Electric Mobility. What the company has claimed to be 'country’s first’ solar-power electric rickshaw was unveiled at an event held at the state secretariat on September 21 along with Tamil Nadu deputy CM O Panneerselvam. It has been noted that they can be doubled up as ambulances, passenger and garbage-lifting vehicles with easy navigation through both narrow and broad roads.

The manufacturer of the so-called ‘India's first’ solar-powered electric vehicle, M Auto Grop’s chairman Mansoor Ali Khan was quoted by ANI saying that it was his tragic personal loss that led to the invention of the autorickshaw. Hailing from a rural area, Khan said that the main road is at least two kilometres away and thus, he lost his father after being unsuccessful in finding an ambulance at the critical stage.

He then added that the M-ambulance will be able to reach such areas with minimum effort. Meanwhile, one of the few customers, Sarala also said that it is cheaper to travel in M-auto because it runs on solar power.

"I am from a rural area from where the main road is 2 km away. We needed to walk 2 km to board buses. My father passed away due to non-availability of ambulance. This M-ambulance can reach such areas easily," he said. 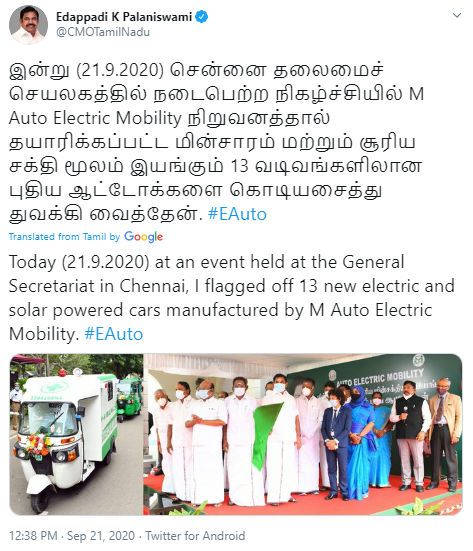 On the same day, Tamil Nadu Chief Minister Edappadi K Palanisamy and his deputy launched 3,501 ‘Amma’ mobile fair price shops across the state to benefit reportedly over 5.37 lakh ration cardholders. This marked a significant addition to 48 such units that were operational in remote and hilly regions in Tamil Nadu including Nilgiris, Namakkal and Salem and others. The main scheme was launched by state’s late CM J Jayalalithaa back in 2014 and the expansion of the same was declared by Palanisamy in March, this year.

The government invested at least Rs 9.66 crore in a bid to help more than five lakh ration card bearers in all 37 districts. The Tamil Nadu CM flagged off seven mobile fair price shops to mark the symbolic rollout of the scheme that involved a salesperson from the main ration shop to visit designated areas once, each month for the distribution of essential items. 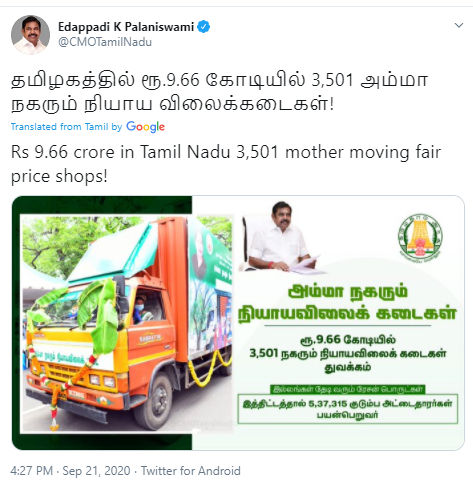