The father of the late Subhasri moved the Madras HC seeking Rs.1 crore in compensation, the formation of an SIT and a special Act to curb illegal hoardings.

The father of the late R Subhasri, who died due to an illegal banner of the ruling All India Anna Dravida Munnetra Kazhagam (AIADMK) party moved the Madras High Court on Wednesday, October 9. He has not only put forth a demand for Rs 1 crore compensation and formation of a Special Investigation Team (SIT) to probe his daughter’s death but also called for a new law to be passed, that would impose maximum punishment to curb illegal hoardings. Moreover, he alleged that the government had not responded to any of his pleas. On September 12, the 23-year-old was riding her two-wheeler when the loosely erected banner fell on her. As a result, she lost control of her vehicle and was allegedly crushed by a water tanker in Chennai that came from behind.

Subhasri’s father pinned the blame for the accident on the inaction of the state government machinery. He contended that it was the failure of the authorities to remove the illegal banner in question.

The petition notes, “The petitioner submits that the foremost reason for the above said accident and his daughter’s death is negligent act of Govt. officials in their duty. The inaction on the part state that the law enforcement machinery is not preventing or removed the illegally erected unauthorized Digital banner/ Flex board on the day of accident.” 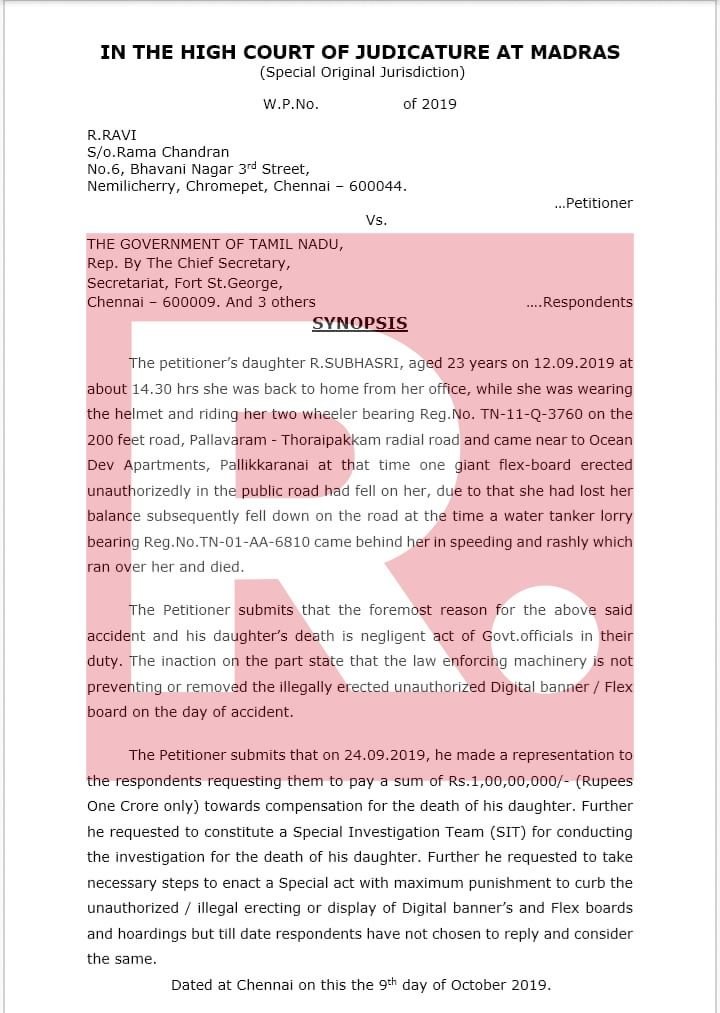 Breakthrough in the case

The illegal banner was apparently erected for the wedding of the son of a former AIADMK councillor Jayagopal. While he initially tried to wash his hands off this incident, the Chennai police included him in the First Information Report (FIR) after tremendous public pressure. Subsequently, he went missing and was finally arrested 290 km from Chennai. The Alundur magistrate sent him to judicial custody till October 11.