Sudha Murthy : The Role Model For All Generations

Author-Philanthropist Sudha Murthy turns a year older on August 19 as she turns 68. In the 1960s, she became the first female to join a male-dominated engineering company. She is an inspiration to many, with the multiple roles she has played over the years of an engineer, author, philanthropist, homemaker and many more. She was way ahead of her time and very confident. She, later on, became the backbone of Infosys, co-founded by her husband Narayan Murthy.

Here’s looking at the life of the ‘How I taught my grandmother to read and other stories’ author’s life :

Sudha Murthy was born in 1950 to surgeon Dr. R. H. Kulkarni and his wife Vimala Kulkarni. She spent her childhood with her siblings, parents and maternal grandparents. Her childhood experiences led her to pen her first book titled ‘How I TaughtMyy Grandmother to Read & Other Stories’ .She was very bright as a student and even received a gold medal after graduation and post-graduation in engineering. She became the first female to get hired at TATA engineering and Locomotive Company (TELCO). During that period she worked in Pune, Mumbai and Jamshedpur.

While Sudha Murthy was working at TELCO in Pune, she got married to Narayana Murthy, who later went on to become the co-founder of Infosys. The couple have two children, Akshata and Rohan. Sudha Murthy is a huge movie buff. Once, in an interview with a magazine, she revealed that she never gets tired of watching films and said that she could have been a film journalist.

When she had left TELCO to help her husband set up Infosys, Jamshedji Tata had told her, “you are the only trustee of money and it always changes hands. When you are successful, give it back to the society that gave you so much goodwill”.

She is actively involved in social work in the field of education, women  empowerment, poverty alleviation, healthcare, public hygiene, art and culture among others. 20 days of every month, she visits rural areas as part of Infosys  Foundation relief work. 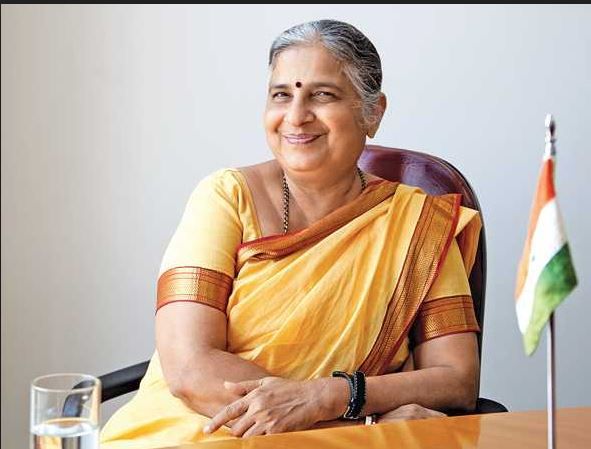 Sudha is a bestselling writer and has sold over 1.5 million books She has authored several fictional novels in Kannada and English. Some of her noteworthy books in Kanada include 'Guttondu Heluve', 'Manada Matu', 'Dollar Sose', 'Runa', 'Hakkiya Teradalli' (travelogue), 'Shalamakkaligagi Computer'.

While some of her popular works in english include, 'Something Happened on the Way to Heaven', 'The Old Man and His God: Discovering the Spirit of India', 'The Bird with Golden Wings: Stories of Wit and Magic'