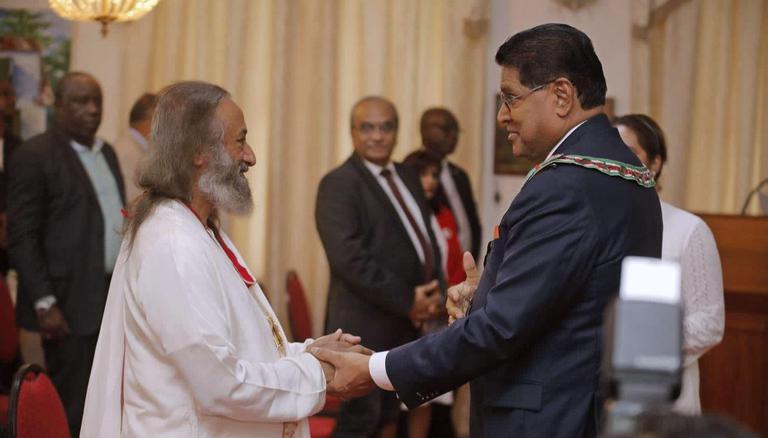 "We are honoured that you’re shining a light worth seeing and feeling, now and also for the future generation. With this declaration, may you lead us all to peace and harmony...The people of Suriname welcome you with a warm heart," President Santokhi said in his address.

The ceremony took place at the Presidential Palace. Sri Sri Ravi Shankar is the first Asian recipient of the award. Historically, the award has been given to heads of state. This is the first time it is being awarded to a spiritual leader. Also present at the ceremony was the Ambassador of India to Suriname, Dr Shankar Bhalachandran.

"I credit this award to the teachers and volunteers who have been doing commendable service in this country. I thank President Santokhi and the judges for this honour," Sri Sri Ravi Shankar said in a tweet.

Sri Sri Ravi Shankar is visiting the South American nation after 21 years, and was warmly received by Suriname's Minister of Defence. In the morning, he met with leading businessmen of the country and spoke about the importance of spirituality in taking care of the mental health of the workforce. In the evening, he addressed the fully-packed national indoor stadium (Anthony Nesty Sporthal) in Paramaribo, where he led a meditation and interacted with the thousands of people present. The attendees basked and swayed in the vibrations of ancient chants and music, in keeping with the vision of The Art of Living of 'Making Life A Celebration'.

The President also took the pledge 'I Stand for Peace, a global movement launched by Gurudev to bring the focus back to peaceful progress, unity and harmony'.