Tablighi Jamaat chief Maulana Saad, on Friday, has issued a statement stating that he has already joined the investigation into

Co-operating with the Delhi police's investigation into the lockdown violation due to the Markaz event, Tablighi Jamaat chief Maulana Saad, on Friday, has issued a statement stating that he has already joined the investigation, replying to both notices issued by the police. He has also asked the police to issue a copy of the FIR detailing all the sections offences have been registered under. He assured that he is 'always ready to co-operate with the police investigation'. 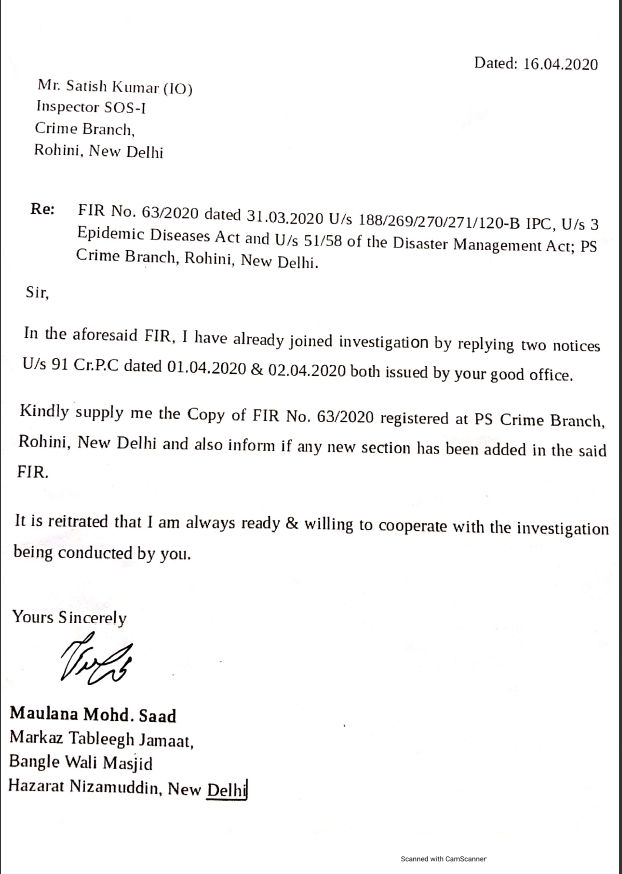 ED and IT book Saad for money laundering & tax evasion

On Thursday, Saad was booked by the Enforcement Directorate for money laundering under PMLA due to a huge amount of money allegedly transferred ahead into it of the Markaz event in Delhi, via Hawala transactions. Apart from the ED, the Income Tax has issued a notice to Saad for alleged tax evasion by trustees, channeling of funds for personal gains, according to sources. Sources have also reported that Saad is currently hiding in his brother-in-law's house in Delhi's Zakir Nagar, allegedly in self-quarantine.

While 16 days have passed since the police found Markaz attendees huddled in the mosque, Saad claims he is still in 'self-quarantine'. Two of his relatives have tested positive for Coronavirus (COVID-19) in UP's Saharanpur. The police have already booked Saad for culpable homicide and booked several attendees for visa violation.

What is the Nizamuddin COVID-19 scare?

On March 30, sources reported that a religious programme was organised at Tablighi Jamaat's headquarters Markaz Nizamuddin mosque between 13-15 March which had over 3400 attendees from Malaysia, Indonesia, Saudi Arabia and Kyrgyzstan and from several states in India. After attending the meeting, prior to the nationwide lockdown, 1500 of these attendees returned to several parts of the country, possibly spreading the COVID-19 virus. The mosque has claimed that while they were letting small groups of attendees leave from the venue prior to the Janta Curfew, several were stuck in the area owing to the nationwide lockdown. All 2631 occupants have been evacuated and the building has been sanitised. The Delhi Crime Branch which has booked the Markaz chief Maulana Saad for violating lockdown is currently searching for him by raiding possible hideouts.

The Health Ministry has revealed that over 30% of the total COVID-19 cases in India were related to the Markaz. Several states like Punjab, Haryana, Delhi, Assam, Telangana, Tamil Nadu, Uttar Pradesh have cases majorly due to attendees of the event and the people they came in contact with. Most of the above-mentioned states have traced the attendees, but those attendees in hiding have been warned of legal action if they don't surrender. India's current COVID-19 tally is at 13,835 cases at 452 deaths.