Telangana Begins Celebration Of Bathukamma, The festival Of Flowers

Marking the beginning of Sharath Ruthu, Telangana began the celebration of Bathukamma. The festival will be celebrated from September 28 to October 6 this year

Marking the beginning of Sarath Ruthu, the nine-day floral festival of Telangana, Bathukamma has begun. The eight-day festival will be celebrated from September 28 to October 6 this year. Bathukamma is a colourful and vibrant festival observed in Telangana and celebrated by women, with flowers that grow exclusively in each region. The Bharatiya Janata Party (BJP) has also organised celebrations along with the BJP Mahila Morcha in the city.

A resident named Madhvi Latha spoke to ANI and said:

"Today I am here at Musherabad to celebrate Bathukamma and this is one of the most colourful and beautiful festival. It's a 100 per cent women festival. I am happy to participate in this event. I wish all the Telanganites a very happy and colourful Bathukamma, stay colourful!"

READ: PM extends festive wishes on arrival, says "Will Get Back to Work"

The devotees perform rituals and worship Hindu deity Gauri Devi in the form of Bathukamma, a lot like Durga Puja. Different names are given to the Hindu deity for nine days. The festival begins with Engili Pula Bathukamma and culminates with Saddula Bathukamma on the last day.

"We celebrate Bathukamma every year with the same zeal and happiness. I come here every year with my family members. We exchange gifts with each other and we do participate and dance to celebrate. This is a nine-day festival and we celebrate the ninth day on a greater scale," a local named Varsha said.

The Chief Minister of Telangana, K. Chandrashekar Rao took to Twitter and extended his wishes on this auspicious day. 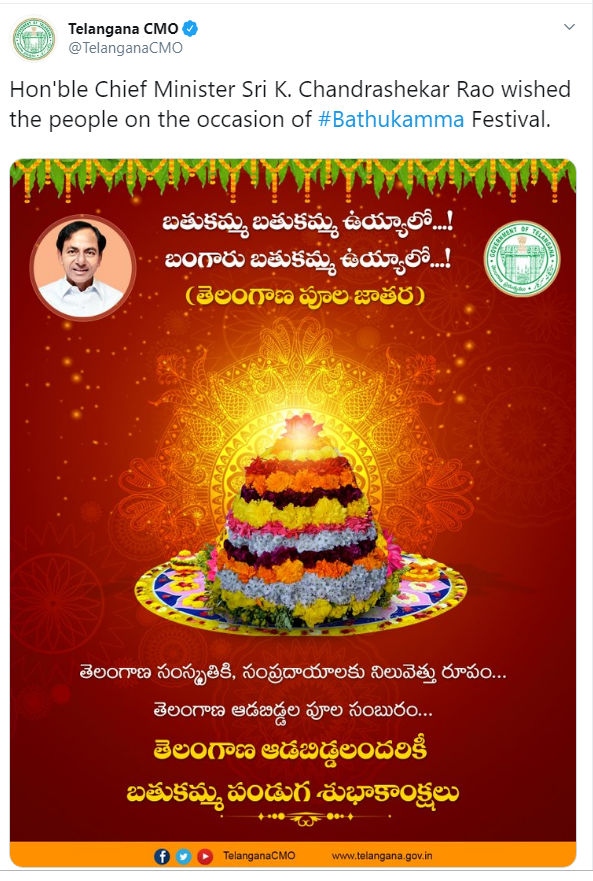 The festival of flowers

This festival is a symbol of Telangana’s cultural identity. It comes at the end of monsoon, before the onset of winter. The monsoon rains usually brings plenty of water into the freshwater ponds of Telangana and it is also the time when wildflowers bloom in various vibrant colours all across the uncultivated and barren plains of the region. During the festival, flower sale in Telangana increases manifold as the Bathukamma idols are made up of flower stack and arranged in seven concentric layers in the shape of temple Gopuram. Seasonal flowers that have medicinal values are used to make the idols. The festivals end with the devotees immersing the idol in Bathukamma Ghat at Tank Bund lake.