Telangana Govt & Union Aviation Ministry Launch 'Medicine From The Sky'; Here's What It Is

The first drone delivered a box carrying vaccine jabs weighing 5 kgs to a community health centre located 3 km away from the launch site in just 10 minutes. 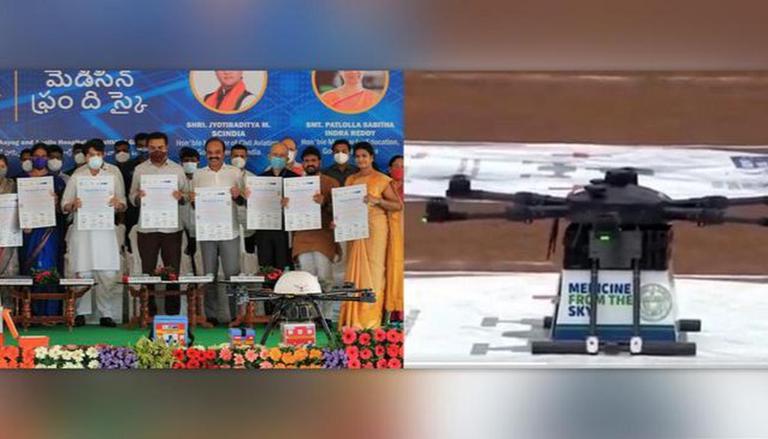 The program is an initiative of the Telangana government and is led by the Emerging Technologies Wing of the Telangana's IT Department, in collaboration with World Economic Forum, NITI Aayog, and HealthNet Global (Apollo Hospitals).

Pilot project to be conducted in 16 green zones in Telangana

The first of its kind project under which vaccines and medicines will be delivered using drones, will be conducted on a pilot basis in 16 green zones of Telangana, and after a few months, based on the data of the trial it will be scaled up to national level.

The project will mark the Ministry of Civil Aviation's (MoCA) maiden drone programme since the ministry recently liberalised its drone policy. The first drone delivered a box carrying vaccine jabs weighing 5 kgs to a near community health centre located 3 km away from the launch site in just 10 minutes.

Consortiums to take charge of project

The Minister of Civil Aviation, Scindia said, "The Ministry's new drone policy has eased rules regarding the use of drones, therein forming the principles of trust, self-certification, and non-intrusive monitoring. Drones are a frontier technology that can be used to access otherwise inaccessible areas, and thus allow equitable access to basic services like healthcare for even the farthest and remotest of areas. India is all set to become the drone hub of the world by 2030, and the potential of our innovators is only infinite."

Kicking off the drone revolution with an ambitious & important project with Telangana IT Minister @KTRTRS Ji. ‘Medicine From the Sky’ is a first of its kind project aimed at transporting vaccines & essentials to remote areas using drones.

Telangana Minister of Information Technology and Communication (IT&C), K T Rama Rao said that the state has always been at the forefront of promoting emerging technologies. "COVID pandemic has highlighted that the healthcare supplies can be considerably strengthened, and drones offer a great help especially when it comes to isolated areas and emergencies. The Medicine from the Sky is the first of its kind initiative in the country to generate insights that shall benefit the entire ecosystem. The enthusiasm and support by all the partners are deeply appreciated.”

Founder of Marut Drones, Prem Kumar lauded the presence of the Ministers in making the initiative a reality. "This campaign will surely spearhead the drone revolution in India," Kumar said.