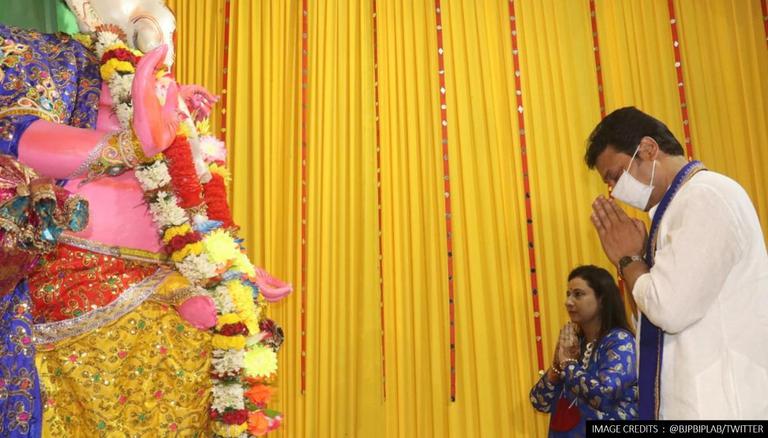 While speaking with ANI, Chief Minister Biplab Deb said, "It is my immense pleasure to be a part of such an auspicious celebration." The Tripura chief minister complimented the coordinators of the Agartala Ganesh Puja committee for their devotion and hard work in making the Ganesh Chaturthi event a huge success. Talking about the organisers, Deb said, “The members over here organise the entire event on their own and bear all the expenses from their pockets for the festival. It is really great to see such dedication and enthusiasm in our youth."

Last year, amid the COVID-19 pandemic, the Ganesh Puja celebration in Tripura was limited. As per Tripura Infoway, devotees were seen worshipping in various pandals but with social distancing. The minimum gatherings were allowed inside the pandals.

Due to the continuation of the COVID-19 outbreak, several states have halted large-scale festivities around the country.  Ganesh Chaturthi is the most celebrated festival in Mumbai. Mumbai authorities implemented Section 144 in the area from September 10 to 19 to prevent public festivities and minimise public gatherings. There will be no Ganpati processions as well as no gatherings of more than five people will be permitted.

The Karnataka government also provided directives for Ganesh Chaturthi festivities last week, allowing only the districts with a Covid positive rate of less than 2%. The administration of Uttar Pradesh has asked residents to celebrate Ganesh Chaturthi at residence and not to display idols in public areas.

Ganesh Puja is a ten-day celebration that begins on the fourth day of the ‘Bhadra’ month of the Hindu calendar. This year's celebration began on 10 September. During the occasion, families worship tiny clay sculptures for prayer. Offerings of flowers and modaks sweet are given to the Ganesh idol in the morning and evening.