US Issues Travel Advisory For Northeastern States Amid Anti-CAA Protests

The United States has issued a travel advisory for its citizens to "exercise caution" while travelling to the North-Eastern states of  India and has also temporarily suspended "official travel" to Assam. In a statement on Friday, the US Embassy in New Delhi listed out precautions for American nationals currently staying in the northeastern states advising them to avoid areas with demonstrations and civil disturbances and to keep a "low profile". The region is beset with days-long protest against the Citizenship (Amendment) Act.

"U.S. Citizens in the northeastern states of India should exercise caution in light of media reports of protests and violence in response to the approval of the Citizenship (Amendment) Bill. Government curfews are in place in some areas. Internet and mobile communications may be disrupted. Transport may be affected in various parts of the region. Protests have also been reported in other parts of the country. The U.S. government has temporarily suspended official travel to Assam," the statement read.

"Avoid areas with demonstrations and civil disturbances. Keep a low profile. Be aware of your surroundings. Monitor local media for updates. Review your personal security plans. Notify friends and family of your safety. Follow the instructions of local authorities," the advisory added. 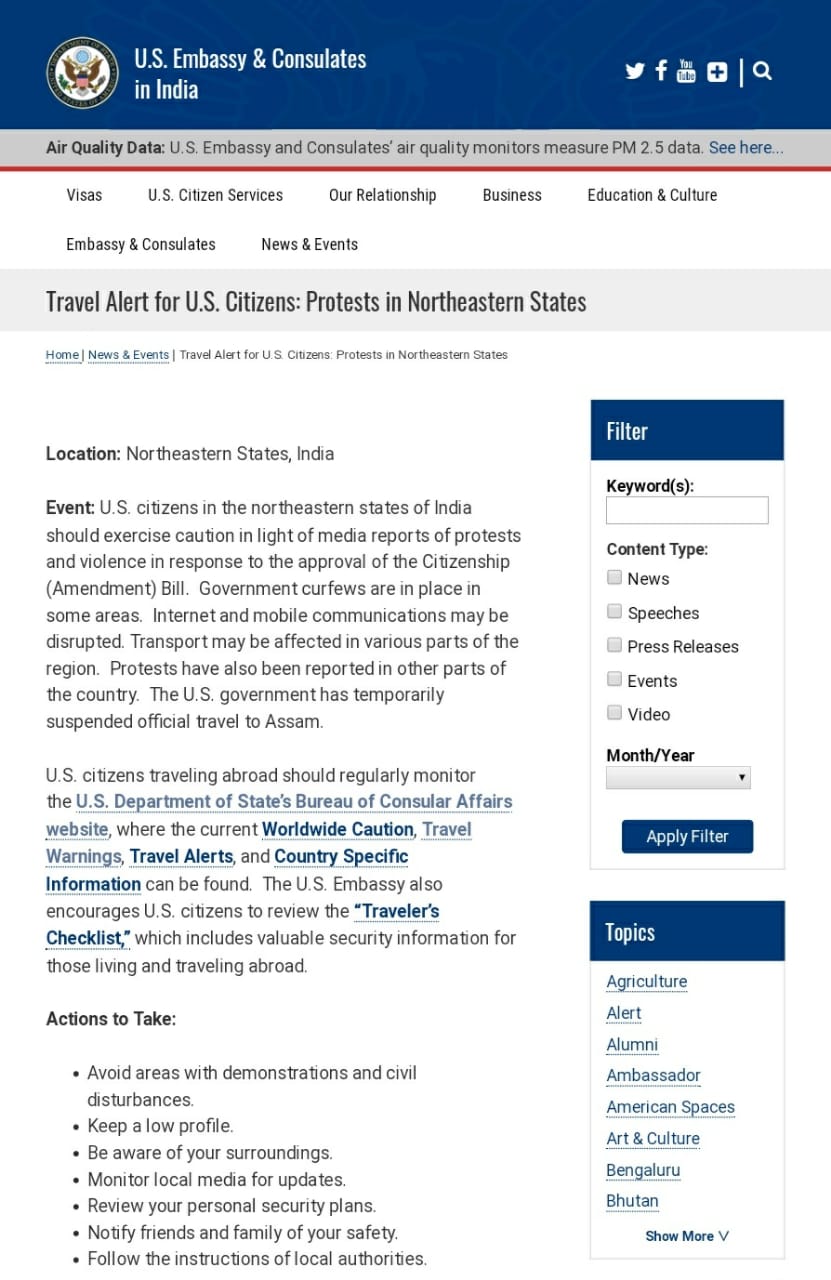 President Ram Nath Kovind on Thursday gave his assent to the Citizenship (Amendment) Bill 2019 that has now become an Act. Earlier on Wednesday, the Rajya Sabha passed the Citizenship Amendment Bill, 2019 (CAB) by a majority of 125-105 votes. This comes after more than 40 MPs including P Chidambaram, Kapil Sibal, Ghulam Nabi Azad, Derek O'Brien, Sanjay Singh, Sanjay Raut, and Vaiko put forth their arguments either in favour or against the CAB. As per the official notification, the law came into effect after its publication in the official gazette late on Thursday night.

READ | 'Situation Is Under Control': Agartala ADGP On Protests Against Citizenship Amendment Act