In a key development, ex-Maharashtra Home Minister Anil Deshmukh approached the Supreme Court seeking to quash the Enforcement Directorate case against him. 
On Monday, Republic TV accessed details of ex-Maharashtra Home Minister Anil Deshmukh's petition in the Supreme Court seeking to quash the ED case. In his plea, the NCP leader has urged the court to hold the investigation against him null and void. Asserting that the proceedings against him are "malafide", Deshmukh stated that he is a mass leader in Maharashtra with huge experience in the state legislature.

His petition read, "In the course of his political career and rise, he has indeed become an eyesore for several vested interests for malafide and extraneous considerations. The series of events that have led to the impugned investigations by Respondent no.2 (ED) are a result of such malafide vested interests. Petitioner is sanguine to expose the falsity, hollowness and the lack of substance in the accusations leveled against him. Petitioner No.2 (Deshmukh) is a septuagenarian who is presently aged more than 71 years and is suffering from various age-related ailments included hypertension and cardiac problems."

Earlier on June 25, the ED raided Deshmukh's residences in Nagpur and Mumbai and had a long interaction with him spanning over several hours. Already, it has provisionally attached immovable assets worth Rs.4.2 crore belonging to the former Maharashtra Home Minister and his family members under the Prevention of Money Laundering Act. This included one residential flat at Worli worth Rs.1.54 crore and 25 land parcels located at Dhutum village in Raigad.

Here are the excerpts of the petition: 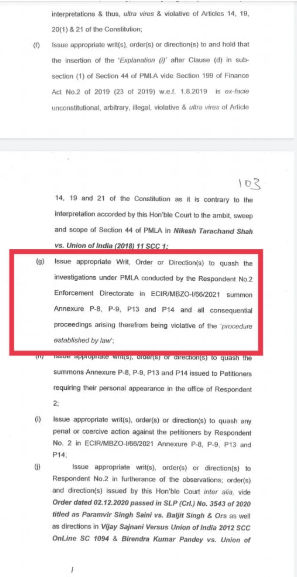 The controversy came to the fore on February 20 when ex-Mumbai Police Commissioner Param Bir Singh levelled serious 'extortion' charges against Anil Deshmukh. In a letter addressed to Maharashtra CM Uddhav Thackeray, Singh refuted Deshmukh's remarks that his transfer was due to serious lapses in the Antilia bomb scare case. Moreover, he alleged that the NCP leader had asked Sachin Vaze to extort Rs.100 crore per month from 1750 bars, restaurants and other establishments in Mumbai.

Subsequently, the ED filed an ECIR against Anil Deshmukh on May 11 under the Prevention of Money Laundering Act for allegedly obtaining illegal gratification which was based on the corruption case registered by the CBI. On June 26, it arrested the NCP leader's personal secretary Sanjeev Palande and personal assistant Kundan Shinde who have been remanded to custody. For three times in a row, Deshmukh has refused to appear before the ED pending the disposal of his plea in the apex court seeking protection against 'coercive action'.