Vijay Diwas: Glimpse Of Pakistan's Instrument Of Surrender On 50th Anniversary Of 1971 War

On December 16, 1971, Pakistan was defeated and forced to publicly surrender to India, the largest military surrender since World War II. 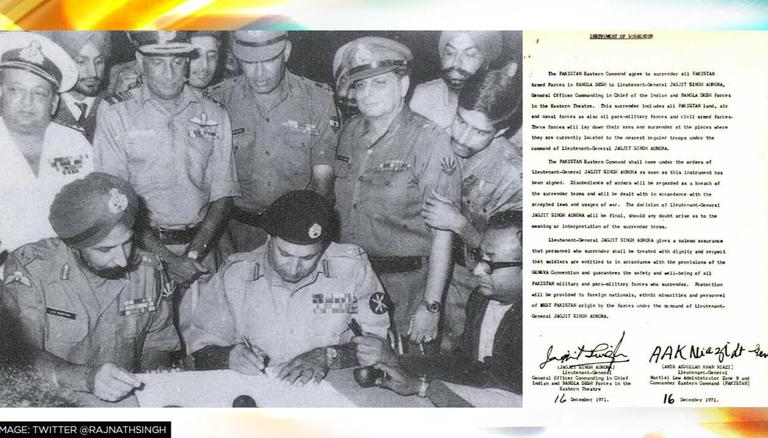 
On December 16, 1971, Pakistan was defeated and forced to publicly surrender to India, the largest military surrender since World War II. It has been 50 years since the Indo-Pak war of 1971, but the memories of the events remain etched in the hearts of the war heroes who fought for the liberation of Bangladesh.

As India commemorates 50 years of the glorious war, let's take a look back at the iconic moment from December 16, 1971, which when Lieutenant-General AAK Niaz of erstwhile East Pakistan signed the 'Instrument of Surrender' before Lieutenant General Jagjit Singh Aurora, the Joint Commander of Indian and Bangladeshi forces. 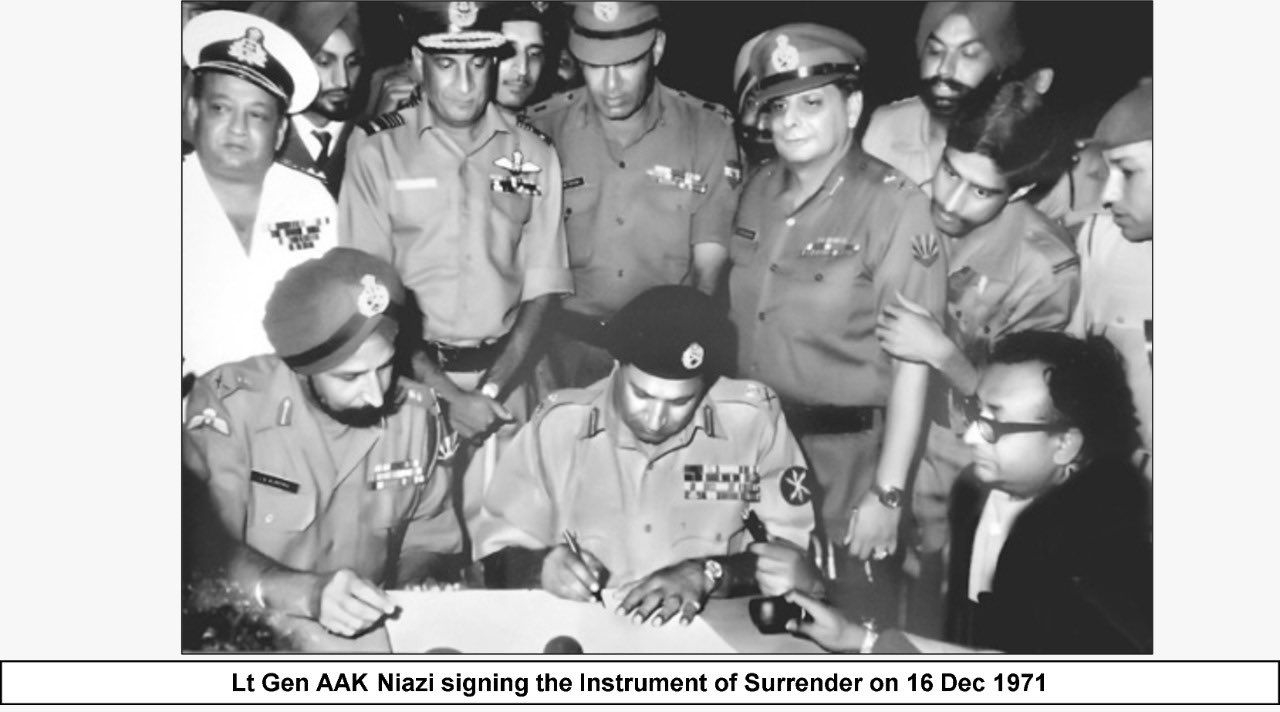 The Pakistani Instrument of Surrender was a written agreement that enabled the surrender of 93,000 soldiers of the Pakistan Armed Forces (Eastern Command) on 16 December 1971, thereby ending the Bangladesh Liberation War and the creation of the nation of Bangladesh. The surrender ceremony took place at the Ramna Race Course garden in Dhaka (then the capital of East Pakistan, now the capital of Bangladesh) on this day.

Lieutenant-General A A K Niazi, Martial Law Administrator of East Pakistan, surrendered to Lieutenant General Jagjit Singh Aurora. Air Commodore A. K. Khandker, Deputy Chief of Staff of the Bangladesh Forces, represented the Provisional Government of Bangladesh at the surrender.

Niazi accepted the surrender without a word, while the crowd on the racecourse erupted in celebrations. The end of the shortest wars in history resulted in the creation of a new country - Bangladesh.

Text of Pakistan's instrument of surrender

The text of the surrender is now a public property of Indian, Bangladeshi, and Pakistani governments and is displayed in the National Museum in New Delhi. The text of Pakistan's Instrument of Surrender document was as follows:

The PAKISTAN Eastern Command agree to surrender all Pakistan Armed Forces in Bangladesh to Lieutenant-General JAGJIT SINGH AURORA, General Officer Commanding in Chief of Indian and BANGLADESH forces in the Eastern Theatre. This surrender includes all Pakistan land, air, and naval forces as also all para-military forces and civil armed forces. These forces will lay down their arms and surrender at the places where they are currently located to the nearest regular troops under the command of Lieutenant-General Jagjit Singh Aurora.

The Pakistan Eastern Command shall come under the orders of Lieutenant-General Jagjit Singh Aurora as soon as the instrument has been signed. Disobedience of orders will be regarded as a breach of the surrender terms and will be dealt with in accordance with the accepted laws and usages of war. The decision of Lieutenant-General Jagjit Singh Aurora will be final, should any doubt arise as to the meaning of interpretation of the surrender terms.

Lieutenant-General Jagjit Singh Aurora gives a solemn assurance that personnel who surrender shall be treated with dignity and respect that soldiers are entitled to in accordance with provisions of the Geneva Convention and guarantees the safety and well-being of all Pakistan military and para-military forces who surrender. Protection will be provided to foreign nationals, ethnic minorities, and personnel of West Pakistani origin by the forces under the command of Lieutenant-General Jagjit Singh Aurora.

The year 2021 marks the 50th anniversary of the liberation of Bangladesh and the birth centenary of Bangabandhu Sheikh Mujibur Rahman. To commemorate the resounding victory of 1971, India has marked this year was as 'Swarnim Vijay Varsh’, and Prime Minister Narendra Modi lit the Victory Flame to mark the beginning of celebrations.

India's President Ram Nath Kovind has been invited by Bangladesh as the guest of honour to attend the 50th Victory Day celebrations of the country from December 15 to 17.