PM Modi recalled the sacrifice by the Muktijoddhas, Biranganas, and bravehearts of the Indian Armed Forces in defeating the oppressive forces in the 1971 war 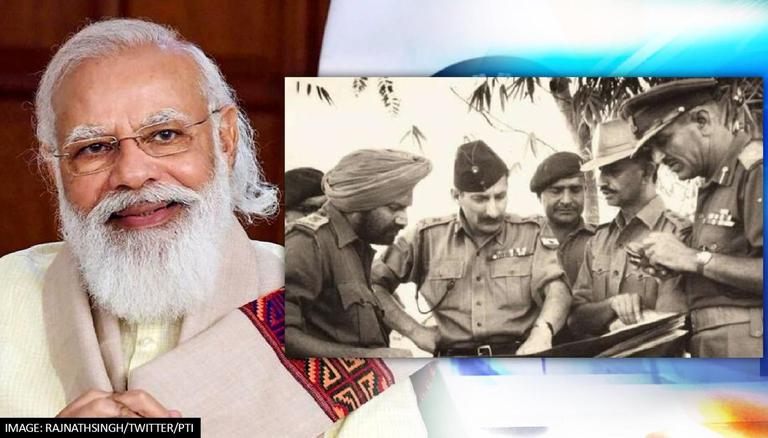 
As India commemorates 50 years of the resounding victory in the 1971 war against Pakistan and the liberation of Bangladesh, Prime Minister Narendra Modi paid tributes to the valour and sacrifice of the war heroes on the occasion of Swarnim Vijay Diwas. Taking to Twitter, PM Modi recalled the sacrifice by the Muktijoddhas, Biranganas, and bravehearts of the Indian Armed Forces in defeating the oppressive forces.

PM Modi also said that President Ram Nath Kovind's presence in Dhaka on 50th Vijay Diwas is of special significance to every Indian.

On the 50th Vijay Diwas, I recall the great valour and sacrifice by the Muktijoddhas, Biranganas and bravehearts of the Indian Armed Forces. Together, we fought and defeated oppressive forces. Rashtrapati Ji’s presence in Dhaka is of special significance to every Indian.

The year 2021 or 'Swarnim Vijay Varsh' marks the 50th anniversary of the glorious victory of the 1971 war and the liberation of Bangladesh.

On December 16, 1971, more than 93,000 Pakistani troops surrendered before the Indian Army's joint forces and the "Mukti Bahini", which resulted in the formation of Bangladesh.

India's President Ram Nath Kovind has been invited by Bangladesh as the guest of honour to attend the 50th Victory Day celebrations of the country from December 15 to 17.

Earlier this year, Prime Minister Modi had lit the Victory Flame to mark the beginning of celebrations. In March, PM had visited Bangladesh and participated in the celebrations of the golden jubilee of Bangladesh's independence, the birth centenary of Bangabandhu Sheikh Mujibur Rahman and 50 years of establishment of diplomatic ties.