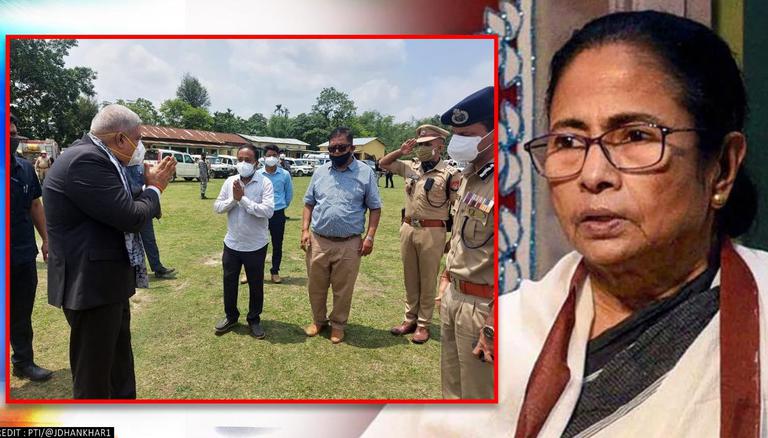 
West Bengal Governor Jagdeep Dhankhar arrived at Assam's Ranpagli on Friday to visit the people who were taking shelter after the violence that broke out after the West Bengal Assembly elections. The West Bengal Governor, who had visited Coochbehar a day earlier, took a dig at CM Mamata Banerjee for remaining 'incommunicado' along with the top bureaucrats and informed that he was greeted by the Divisional Commissioner, Special DGP, DM and SP as per protocol on his arrival at Assam. Addressing the media after his visit to the shelter, governor Jagdeep Dhankhar revealed that the situation of Coochbehar was 'worst', adding that it was unfortunate for a 'mass leader' like Mamata to provoke the public during her poll campaign.

West Bengal Governor Jagdeep Dhankhar further asked how CM Mamata could claim all was well in the state while 8-10 persons were blocking the Governor's car. The Governor's car was greeted by people waving black flags during his visit to Coochbehar on Thursday. He further revealed that an old lady taking shelter after the post-poll violence in Assam had told him that she feared going back to Bengal as they would allegedly 'kill her'.

Targeting CM Mamata Banerjee, Governor Jagdeep Dhankhar asked why she did not visit the areas affected by violence and said that she would be aware of the ground situation only if she visited these areas. He also lashed out at the state's top bureaucrats and termed them as 'political cadre' instead of being the 'protectors of democracy'. Governor Jagdeep Dhankhar urged CM Mamata Banerjee to take a cooperative and constitutional stance and to give up her 'confrontationist approach'. The Governor is scheduled to visit areas affected by post-poll violence in Nandigram on Saturday.

Would urge @MamataOfficial to take to cooperative and constitutional stance and give up confrontationist approach as this alone can blossom democracy, promote rule of law and serve the people. Would take initiative to so accomplish by deliberating with CM.

Governor will leave tomorrow at 9.15 am from RCTC by BSF Helicopter.

Governor will perform Puja at Janakinath Temple. He will return same day. pic.twitter.com/3ED3lbweBj

Since the declaration of election results in the state, several reports of brutal violence have surfaced. BJP has claimed to have lost several party workers under TMC's torture while Mamata Banerjee on the other hand has claimed that violence has been reported from seats won by the BJP. On the other hand, CPI(M) workers have also alleged violence by TMC workers.

The Central Government has also intervened in the matter with Home Minister's three-member team who visited Bengal and evaluated the situation. Meanwhile, Governor Dhankar has also sought reports from security officials of West Bengal and expressed disgust over the poor state of affairs by Mamata Banerjee. The Governor also lashed out at West Bengal police chief for not submitting a detailed report on the violence.