The Indian Army along with the Sopore Police and the Central Reserve Police Force (CRPF) have arrested two uncategorised Lashkar-i-Taiba (LeT) terrorists. 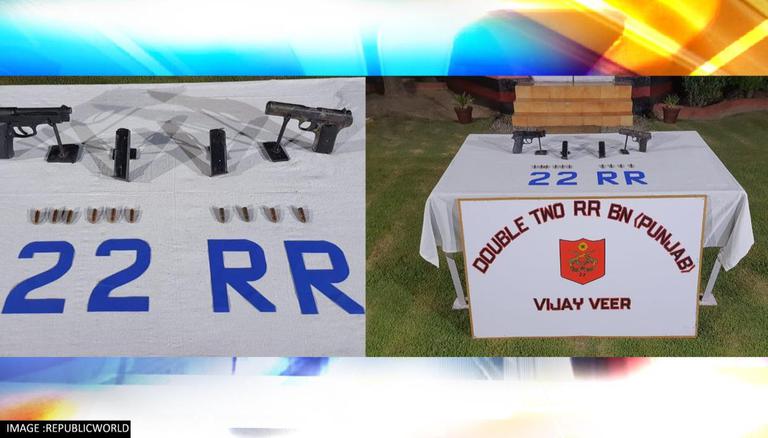 
Averting a possible terror attack, the Indian Army along with the Sopore Police and the Central Reserve Police Force (CRPF) have arrested two uncategorised Lashkar-i-Taiba (LeT) terrorists from North Kashmir's Sopore district. The two suspected terrorists were arrested after the forces detected their movement in suspicious conditions following which weapons were also recovered from their possession.

As informed by police officials, the operation was carried out on the basis of specific inputs regarding the movement of two suspected individuals from the fruit market to Naupura chowk. Reportedly, they were likely to carry out a targeted attack on the security forces. Based on the inputs, a joint Naka was established by 22 Rashtriya Rifles, Sopore Police, and 179 Bn CRPF at multiple points including Mazbug Chungi, MRF chowk, Naupura Chowk, Ahad Baba Chowk, and Fruit Mandi junction.

It was during the checking at the Naka, that it was observed that two men were moving towards deployed security personnel at the Naka in a suspicious manner. Observing their suspicious body language, the officials subsequently asked them to stop, but in vain.

However, the suspected individuals tried to flee from the spot, taking cover of darkness and heavy traffic at Mandi road but, were eventually nabbed by the alert and vigilant troops. Following this, the troops assessed the situation and displayed extreme restraint and control by not opening fire in view of the darkness and civilians in the proximity of the area, to avoid any civilian casualty.

The arrested men were questioned and searched following which 2 pistols, 2 magazines, and 10 rounds were recovered from their possession.

Notably, a case has been registered at the Sopore Police Station under relevant sections and further investigation is ongoing.

This came weeks after three LeT terrorists were arrested from the same district in Haigam when three individuals were moving suspiciously. Later, they were chased by the security forces who nabbed them immediately. Also, three Chinese pistols, ammunition, and incriminating materials were recovered from their possession.