After a building collapsed on the Kharar-Landran road in Mohali on February 8, the Chief Minister of the state Amarinder Singh ordered a probe into the matter.

After a building collapsed on the Kharar-Landran road in Mohali on February 8, the Chief Minister of the state Amarinder Singh ordered a probe into the matter. He also stated that rescue operations will continue to free the trapped individuals under the debris. He has asked for a report to be submitted at the Chief Minister’s Office within seven days. 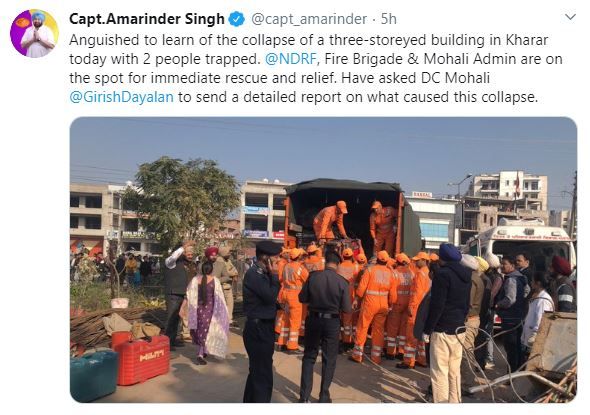 As per the statement released from the Chief Minister’s Office (CMO), “After the Saturday’s building collapse in Mohali, Punjab Chief Minister Captain Amarinder Singh has asked the Additional District Magistrate (ADM), SAS Nagar, to conduct a thorough probe into the incident and submit his report within a week. The Chief Minister has also directed the district administration to take all possible steps to rescue those who might be still trapped in the debris of the building. According to information received from the Deputy Commissioner, SAS Nagar, Girish Dayalan, two or three persons were believed to be stilled under the debris and rescue operations were going in on war footing.”

As per the notification issued by the CMO, the entire cost of the treatment of those injured in this incident would be borne by the State Government. Reports suggest that so far two persons have been rescued and are under treatment. According to the Deputy Commissioner, preliminary information suggests that a JCB was at work on construction work for a basement in the adjacent building when this structure collapses.

The probe into the matter would also ascertain if the construction was illegal or not, said the letter issued by the state government. As the emergency was announced, teams of the district administration led by SDM and ADC rushed to the spot immediately and services including Fire Tenders medical teams were also called in. The NDRF teams with specialised equipment were pressed into service and an additional team from Ludhiana had also been called to the site.

As per the letter issued by the CMO, “The Western Command of Army was also contacted and were on stand-by, and their engineers would also join the rescue operation if needed. Some machines like hydra crane from L&T had been locally arranged for clearing the debris. The NDRF would also run their canines to trace anyone buried or trapped under the debris before the rescue operation is called off.”