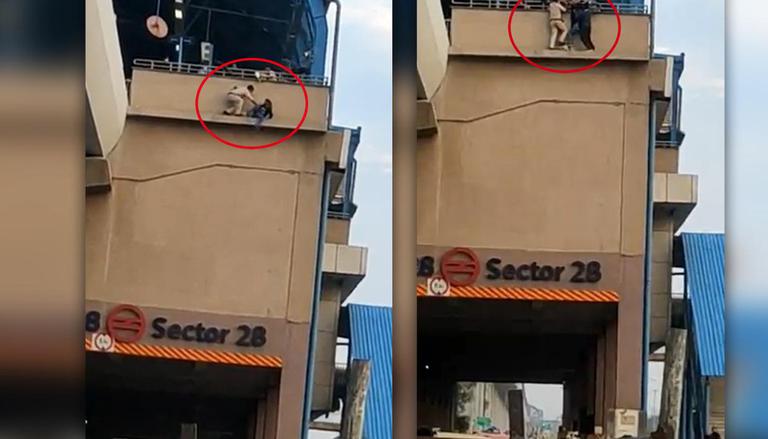 
A girl at Faridabad metro station who was attempting to commit suicide by jumping from a building, was rescued by the police on Sunday evening. A video of the incident that was shot by onlookers went viral within just a few hours. As per reports, the police said that at around 6:30pm, they were informed about a girl who had overstepped the railing of the building and was trying to commit suicide at the sector 28 metro station platform number 02 in Faridabad.

SI Dhan Prakash and Constable Sarfraz from the Faridabad police team who were posted at the police station at the time, reached the spot. While Central Industrial Security Force (CISF) personnel and metro staff diverted the girl’s attention, Constable Sarfraz got down on the ledge and rescued the girl. He climbed the balcony from the other side and came closer to the girl to prevent her from jumping.

Police saves girl, counsels and hands her over to her family

Reportedly, the girl later revealed that she was an employee of sector 28-based Sai Export company. She mentioned that she had been under stress due to her work. After the Faridabad Police rescued her, they called her family and handed her over to them after counselling her. The police counselled her against committing suicide and advised her to reach out to people and talk about her problems with her family.

READ | UP: Woman SP member dies by suicide; family claims she was ill-treated by police

The Faridabad Police shared a video of the incident and praised the officials who saved the girl from attempting suicide, for risking their well-being to save a life. Netizens reacted positively to the Faridabad Police's effort in rescuing the girl and praised the police officials for their bravery and timely response. As per WHO, 1 in 100 deaths is by suicide. Among young people aged 15-29, suicide was the fourth leading cause of death on a global scale after road injury, tuberculosis and interpersonal violence, despite the rates varying between countries, regions and other demographics.

Great Rescue by @FBDPolice . It's Sec 28, Faridabad, Metro Station.
We should do counseling of this teenage girl so that rather than thinking of suicide she should move ahead in her life. @GenRajan@Cmde_GPrakash @avm_pranaysinha @AshTheWiz @bkum2000 @kayjay34350 pic.twitter.com/91RScdMxrd

WE RECOMMEND
MEA slams UN body's 'disrespectful comments on SC' in its call to stop Khori Gaon eviction
Palaeolithic site found in Faridabad's hill forest may be largest in Indian subcontinent
Haryana: 1st Delta plus variant reported in Faridabad, Anil Vij says the state is prepared
DCW seeks against man who attacked his wife with hot oil, acid in Faridabad
Illegal structure on half of 150 acre in Aravali removed, civic body tell SC; gets 4 more weeks