Republic Media network has accessed the schedule of the hearing at Mumbai, in which Sharad Pawar's name has been mentioned: 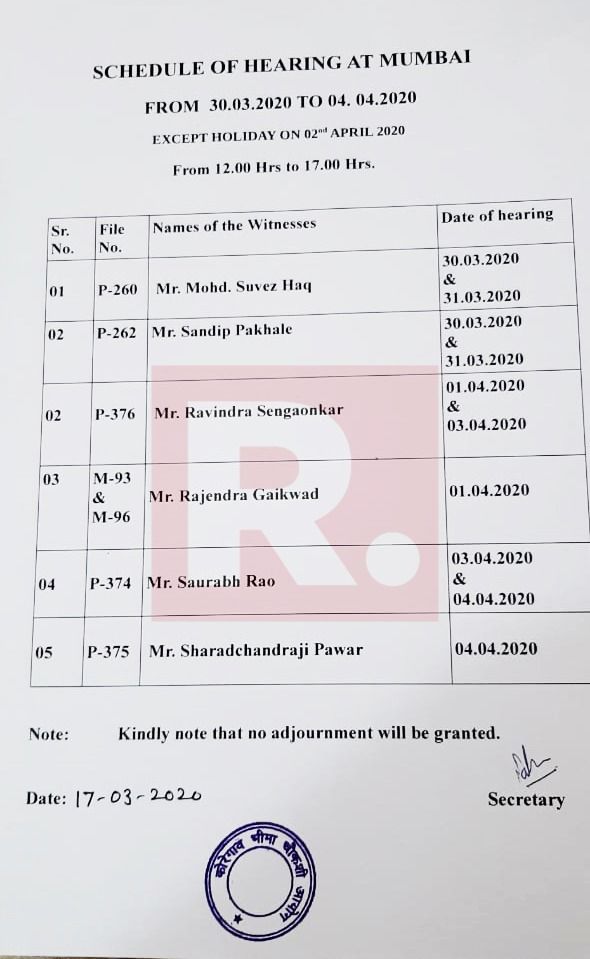 The NCP Supremo had expressed resentment over Maharashtra Chief Minister Uddhav Thackeray's decision of not resisting the move of the Centre to transfer the case to the National Investigation Agency (NIA). Pawar had then opined that law and order is a state subject and hence falls under the state's jurisdiction. He had advised CM Uddhav Thackeray to constitute an SIT for the case.

With regards to the Bhima Koregaon violence, the Supreme Court on Monday denied anticipatory bail to activists Gautam Navlakha and Anand Teltumbde and gave them three weeks to surrender themselves and asked them to surrender their passports immediately. The Bombay High Court also on February 15 rejected their pleas seeking protection from arrest. The HC had in its order said that 'prima facie there is material against applicants to show complicity in the crime.' During the investigation of the case, the agency has also alleged that Navlakha and Teltumbde have Maoist links. Earlier, the top court had rejected their pleas seeking quashing of FIRs registered against them. They were first arrested in the case related to violence at the Bhima Koregaon in Pune on January 1, 2018.

In January 2018, the Pune Police lodged an FIR against Navlakha and others after the Elgar Parishad held on December 31, 2017, that had allegedly triggered violence at Koregaon Bhima in Pune district the next day. Gautam Navlakha and the four others were accused have booked under the provisions of the Unlawful Activities (Prevention) Act (UAPA) and Sections 121, 121(a) and 124 of the Indian Penal Code (IPC) amounting to sedition, waging a war against the State, and conspiring to commit certain offences against the State.