As per sources, the meeting is to chalk out the plan regarding Coronaviurus lockdown post-May 3, and implementation thereof. The Prime Minister on Thursday also met the Cabinet & discussed strategies to attract foreign investments post COVID-19 crisis in an attempt to boost the economy.

The second Coivd lockdown will end on May 3 ahead of which Centre has released list of red, green and orange zones under broad criteria keeping into consideration the recovery rate along with the cases being reported and surveillance feedback. The Central government has also hinted at ease in restrictions across the country after May 3.

The death toll due to the novel coronavirus pandemic rose to 1,147 with 72 more fatalities and the number of cases climbed to 35,043 in the country on Friday, according to the Union Health Ministry. The active COVID-19 cases stood at 25,007, while 8,888 people have recovered, and one patient has migrated. The total number of 35,043 cases includes 111 foreign nationals, the ministry data said.

Out of the 72 deaths reported since Thursday evening, 27 fatalities were from Maharashtra, 17 from Gujarat, 11 from West Bengal, seven each from Madhya Pradesh and Rajasthan, and three from Delhi.

Union Health Secretary Preeti Sudan on Friday has written to Chief Secretaries of all states and union territories designating Red, Orange and Green zones. 130 red zones have been marked across the country, 284 orange zones, and 319 green zones districts. The maximum number of red zones are in Uttar Pradesh (19), followed by Maharashtra (14), Tamil Nadu (12), Delhi (11) and West Bengal (10). 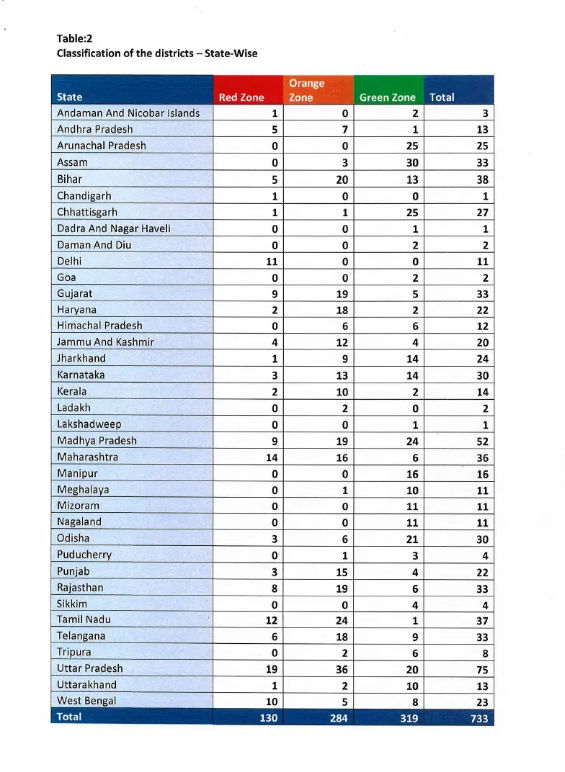 Letter To Chief Secretaries by ankit on Scribd