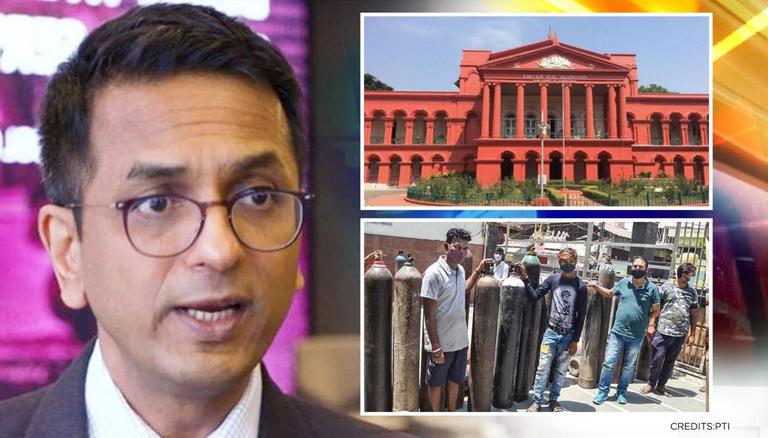 
Refusing to intervene, the Supreme Court bench comprising of Justices DY Chandrachud and MR Shah, on Friday, dismissed the Centre's plea challenging Karnataka HC's order increasing the state's oxygen supply to 1200 MT.  The Supreme Court maintained that the HC's decision was calibrated one and in adherence to the state's demand of 1162 MT, refusing to interfere. Karnataka has 5,17,095 active COVID cases, 12,55,797 recovered cases and 17,212 fatalities - seeing a daily increase of 49,000 cases on average.

The Centre, represented by SG Tushar Mehta argued, "If every High Court orders such things, where will this lead?". When SC said that it cannot 'ask High courts to shut their eyes' to the crisis, Mehta argued, "This leaves room for every high court to start examining and allocating oxygen". In reply, the SC said, " we will not keep the citizen of Karnataka in lurch".

The Karnataka High Court has asked the Centre to immediately increase the cap on allocation of liquid medical oxygen (LMO) to Karnataka to 1200 MT per day amid the crisis. The bench of Chief Justice Abhay Oka and Justice Aravind Kumar directed the Centre after analysing the pandemic situation in Karnataka. "We direct the Government of India to increase the cap on supply of oxygen to the state to upto 1200 MT per day from the sanctioned allocation of 965 MT," said Chief Justice Abhay Oka.

READ | From Central Vista controversy to Delhi Jal Board's petition, cases in SC on May 7

As per the Karnataka Government's order the requirement that the state has made out and has not been refuted by the Centre is a minimum of 1162 MT per day and a maximum of 1792 MT per day, as on May 5. In addition, the Karnataka High Court has also asked the state government to submit a representation to the Centre stating a projected estimate of oxygen for the next one week.

Immediately, Centre moved SC seeking a stay on the directions issued the HC, arguing that Karnataka is being supplied 965 MT LMO presently and the order needed to be stayed urgently. In a Special Leave Petition filed before the SC, the Centre argued that the directions passed by the Karnataka HC could lead to 'mismanagement of resources and create a  chaotic environment in an already overburdened system' and pointed out that the Centre was working day and night as it grappled with the COVID-19 crisis. Further, the Centre's plea claimed that time had not been accorded by the HC for the Union Govt to justify the Oxygen amount allocated to Karnataka and noted that the Centre had no alternate remedy.

Currently, the Yeddiyurappa govt has imposed a 14-day lockdown across the state till 11 May. As per the state's guidelines, all industries except construction, manufacturing & agriculture sectors have been shut, with shops selling essential goods allowed to be open between 6-10 AM. Karnataka's capital -Bengaluru has overtaken Mumbai in terms of active cases reporting over 23,000 cases daily on average.