Sources have revealed that Rajkumar Patel and Bachchu Kadu are with the Eknath Shinde camp in Guwahati and are likely to move a no-confidence motion. 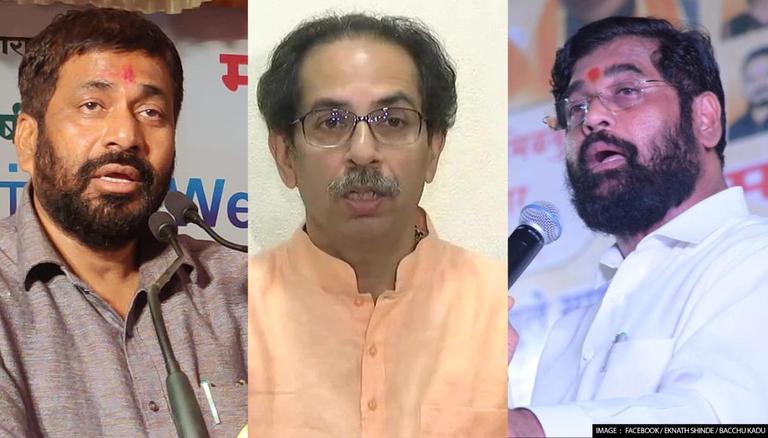 
In an exclusive scoop, Republic Media Network has learned that two MLAs of the Prahar Janshakti Party (PJP) are also camping with rebel Shiv Sena leader Eknath Shinde. Sources have revealed that Rajkumar Patel and Bachchu Kadu are with the Shinde camp in Guwahati and are likely to move a no-confidence motion against the Uddhav Thackeray government on Thursday, June 30.

Earlier, Republic had reported learned that the movement of the Shinde camp from Guwahati to Mumbai is expected within the next few days. At present, there are at least 39 Sena MLAs, 2 Prahar Janshakti Party MLAs, and 7 Independents in the rebel camp. With the support of the BJP, the brigade can easily topple the Uddhav Thackeray government.

With the MVA government likely to fall, Chief Minister Uddhav Thackeray has made a last-ditch attempt and issued an emotional appeal, urging his rebel MLAs to return back to Mumbai. Stating that he was 'worried' for their well-being, Thackeray remarked that as the head of the Shiv Sena family, he seeks dialogue with them.

"You are stuck in Guwahati for the past few days. Every day new information is coming out about you, many of you are also in touch. You are still in Shiv Sena at heart. The family members of some of you MLAs have also contacted me and conveyed their sentiments to me," said Uddhav Thackeray.

He added, "As the head of the Shiv Sena family, I respect your sentiments. Get rid of the confusion. there will be a sure way to it. We will sit together and find a way out of it. Do not fall into the trap of someone's mistake, the respect given by Shiv Sena cannot be found anywhere, if you come forward and speak, the way will be paved. As Shiv Sena party chief and head of the family, I still worry about you. Come in, take a look and enjoy!"

The Maharashtra government plunged into a crisis on June 21 after senior Shiv Sena leader Eknath Shinde and other party MLAs went incommunicado and went to the Le Meridian hotel in Surat. While the rebels urged Maharashtra CM Uddhav Thackeray to sever ties with NCP and Congress and return to the NDA fold, the latter has refused to accept this demand following which the camp moved base to Guwahati.

As the rebels continue to be holed up in a Guwahati hotel, Shiv Sena filed a petition seeking the disqualification of 16 party MLAs. Subsequently, they challenged the disqualification proceedings and Eknath Shinde's replacement as the Legislative Party leader in the SC.

On Monday, the Supreme Court's put the disqualification of the 16 rebel Shiv Sena MLAs on hold till July 12. The time for rebel MLAs to respond to Deputy Speaker's notice has been extended till July 12, 5.30 PM and the top court has asked the Maharashtra government to protect the life and properties of all 39 MLAs and their families.