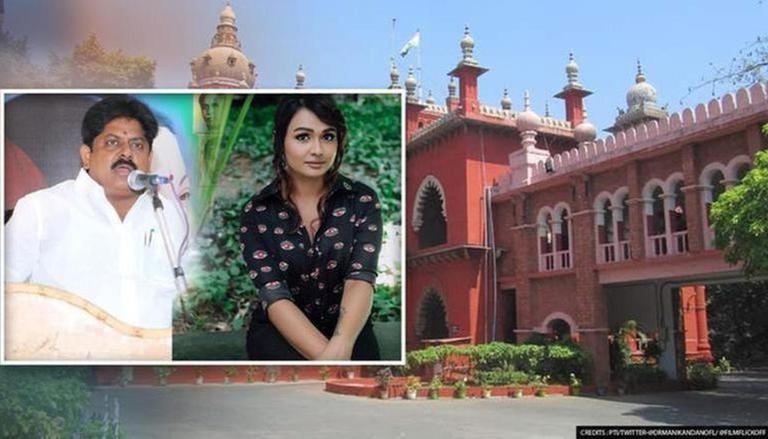 
Former AIADMK Minister M Manikandan, who has been arrested for allegedly raping actor Shanthini Theva, has moved the Madras High Court seeking bail, sources informed on Friday. The former IT Minister was arrested from Bengaluru on June 20 and was lodged at the Saidapet sub-jail following which he was shifted to Puzhal jail. As per reports, AIADMK leader M Manikandan in his plea has claimed that maintaining a sexual relationship with actor Shanthini Theva and promising to marry her after divorcing his wife did not amount to rape.

Further, M Manikandan claimed that the complaint was lodged against him by Shanthini Theva to avoid the repayment of a loan she had borrowed from the former Minister. The AIADMK leader, in his plea, claimed that he had a credible track record and had served the people of Tamil Nadu as a surgeon for 12 years. He also claimed that Shanthini Theva was well aware of the consequences of maintaining a sexual relationship with a married man.

Former AIADMK Minister M Manikandan was booked under Sections 417, 376, 313, 323, 506 (ii) of the Indian Penal Code (IPC) and under section 67A of the Information Technology Act based on a complaint lodged by Tamil actor Shantini Theva. Speaking to the press, Shantini Theva, who was also a former ambassador for Tamil Nadu tourism, had claimed that she had been physically & mentally abused by the former AIADMK Minister for nearly five years while they were in a relationship during which she was also allegedly forced to abort thrice after becoming pregnant. The actor had also alleged that the Minister had threatened her family.

READ | AIADMK Ex-MLA Manikandan not to be arrested in Shantini Theva rape case till June 9: HC

Narrating her ordeal to the media, Shantini Theva had claimed that she met AIADMK leader Manikandan in 2017 and got close to him after the latter promised to do business together in Malaysia. The actor had revealed that she frequented the ex-Minister's bungalow as she was told by Manikandan that his wife did not take good care of him and that he allegedly wanted to marry her. Noting that she had reportedly tagged along with the AIADMK leader to several places during his official tours, Shantini Tehva had claimed that she was tortured and was also forced to abort after becoming pregnant as the AIADMK leader had objected to it, allegedly citing that he was a Minister.

Explaining what led her to file a police complaint against AIADMK leader Manikandan, Shantini Theva had claimed that the ex-Minister had threatened to leak a photo of the actor (which he had allegedly taken without her knowledge). Further, she claimed that Manikandan had many photos of her in his possession and filed a police complaint against him, seeking her photos to be deleted. On being asked why she did not raise a complaint while she was physically abused by Manikandan, Shantini Theva asked who would have taken her complaint seriously if she had filed one then & went on to say that they (Manikandan & her) had taken life forward at multiple points after compromises.

READ | No relief for AIADMK's Manikandan's in actor's rape case; HC wary of him influencing probe

Noting that all the details of her abuse had been mentioned in the complaint, Shantini Theva claimed that she had WhatsApp photos as evidence to show that she lived with Manikandan for five years. Showing pictures from her alleged WhatsApp chat with the AIADMK leader (which she attached with her complaint to the Police), Shantini Theva claimed that Manikandan had threatened her by saying that he had photos of her including those in a compromising position.