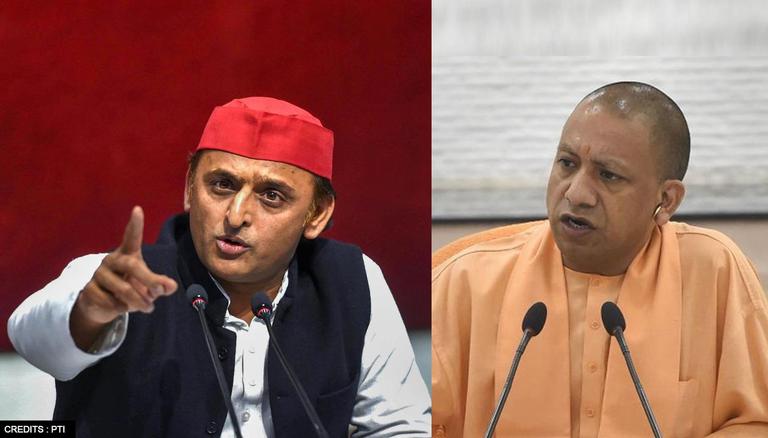 
Breaking his silence over UP CM Yogi Adityanath's 'Abba jaan' taunt, Samajwadi party chief Akhilesh Yadav on Tuesday, claimed that the CM's language was worsening due to BJP's decreased poll chances. Scoffing at UP govt's recent botched advertisement displaying a Kolkata flyover, Yadav alleged that the Yogi govt was now taking credit for other state govt projects apart from the SP govt's works. The 403-seat UP assembly where Yogi rules with an iron-clad majority of 314 seats, is up for grabs in February 2022.

"The defeat of BJP govt is imminent. Hence, the party state chief's language has changed. Till now, this govt was renaming places, changing colours, taking credit for SP govt's works, but now they are stealing photos from other states and passing it off as their own. This what their politics is," said Akhilesh Yadav in a Lucknow press conference.

On Sunday, while launching several development projects in Kushinagar, Adityanath alleged that the SP govt along with their used to eat up the ration of the poor, letting them die. He added that 'those who called Abba-jaan used to benefit one community' - referring to Akhilesh Yadav's alleged preference towards Muslims. Vowing that such kind of acts would not occur under BJP, he said that his government had distributed ration in an indiscriminate fashion.

Taking a jibe on Akhilesh Yadav, he said, "Why did the poor not get the ration before 2017? Ration used to reach Nepal and Bangladesh. Those who called their father Abbajan used to benefit a particular section. There used to be caste-based appointment lists. Fair appointments are being made in the BJP government and youth are getting employment". His comments have been slammed by Congress, AAP and J&K NC as 'communal and hateful'.

With BJP fighting under the leadership of incumbent CM Yogi Adityanath, several fronts have cropped up to challenge the ruling BJP. While Suheldev Bharatiya Samaj has allied with AIMIM, Pragatisheel Samajwadi Party; parties like AAP, Shiv Sena, Azad Samaj Party and JDU have announced that they will be contesting for the UP polls. SP chief Akhilesh Singh Yadav has stated that SP will only ally with smaller political parties for the 2022 Assembly polls, holding talks with Mahan Dal, NCP. Mayawati has already announced that her party will fight polls alone in UP and Uttarakhand, while allying only with Akali Dal in Punjab.  Congress has aggressively campaigned under the leadership of Priyanka Gandhi in the state, eyeing its solo return.