Captain Amarinder Singh, who was facing opposition from the state party leaders, took centre stage at the dinner meeting hosted by Rana Sodhi. 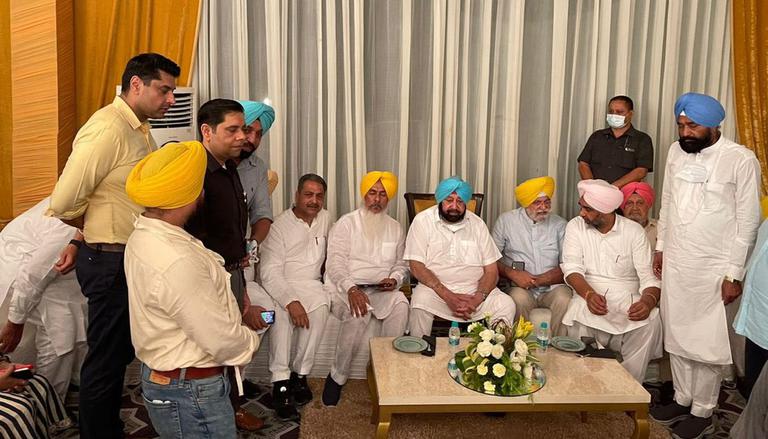 
Amid the ongoing Punjab crisis, Captain Amarinder Singh on Thursday had a show of strength as the Chief Minister took centre stage at a dinner meeting with 58 MLAs and 8 MPs from the party. The meeting came a day after multiple Punjab Congress leaders showed resentment over the decision of the CM leading the party in the upcoming Assembly polls. The grand dinner meeting was hosted by cabinet minister Rana Gurmit Singh Sodhi at his residence.

Captain Amarinder Singh, who was facing opposition from the state party leaders, plans to win back the MLAs by hosting talks with them. The dinner meeting was held on Thursday as part of the efforts to secure support for the upcoming assembly polls. Media advisor to Punjab CM Raveen Thakural, while tweeting pictures of dinner meeting, informed that the host Rana Sodhi expressed his confidence in the CM’s leadership.

Raveen Thakural’s tweet informed that the MLAs and MPs present at the meeting showed confidence in the CM. Rana Sodhi, who is the state sports and youth affairs minister said, "I'd invited like-minded @INCPunjab MPs & MLAs for dinner. 58 MLAs & 8 MPs graciously accepted my invitation & expressed the confidence that the party would win the 2022 polls under the leadership of @capt_amarinder. The journey has started today."

Meanwhile, three ministers close to Navjot Singh Sidhu, namely Sukhjinder Singh Randhawa, Tript Rajinder Singh Bajwa, and Sukhbinder Singh Sarkaria stayed away from the dinner organised after the cabinet meeting. The three ministers had earlier travelled to Dehradun and met Punjab Congress in-charge Harish Rawat and raised concern over the leadership of Amarinder Singh. However, Rawat reaffirmed that the polls will be contested under the leadership of the CM.

The Navjot Sidhu camp on Wednesday tried to convince AICC Punjab in-charge Harish Rawat to remove CM Amarinder Singh from the assembly poll leadership position and failed. Following the request, Rawat reportedly agreed to discuss the escalating tussle in Punjab Congress with party president Sonia Gandhi.  Speaking to the media earlier, Harish Rawat reiterated that Congress will contest the 2022 Assembly election under the leadership of Amarinder Singh. Trouble mounted for the latter when over 20 legislators met at state Cabinet Minister Tript Bajwa's residence raising a banner of revolt against him. This meeting came in the wake of Singh launching a tirade against Sidhu's advisors Malvinder Singh Mali and Pyare Lal Garg over their controversial statements.