Slamming BJP for politicising the Amravati violence, NCP supremo Sharad Pawar on Monday,  said that the BJP was inflating the issue by calling for a bandh 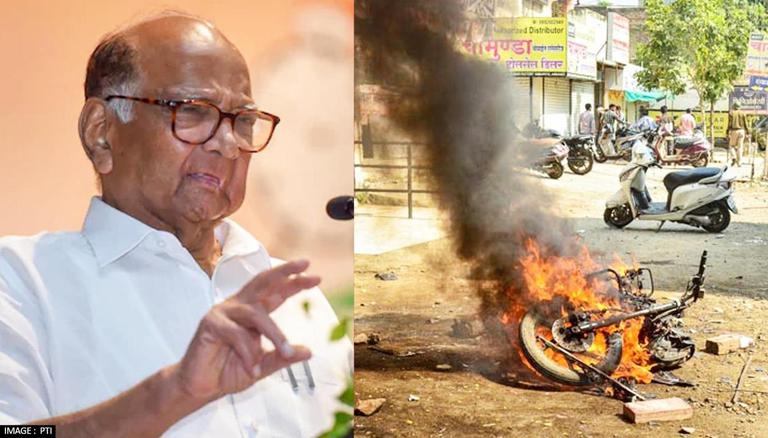 
Slamming BJP for politicising the Amravati violence, NCP supremo Sharad Pawar on Monday,  said that the BJP was inflating the issue by calling for a bandh in the entire district. He claimed that those who had ruled the state at one time must not jeopardize the interests of the state and the common man. Maharashtra's Amravati has witnessed violence regarding communal clashes in Tripura and is currently under a 4-day curfew.

"Even if we admit that something happened in Tripura, there is no reason for it to happen in Maharashtra. There was no reason for some incidents in Malegaon, Amravati, Nanded in the state. So people need to think about how important these tendencies are. While the state is moving towards peace, but attempts are being made to create problems for one reason or another. Calling bandh in entire district, jeopardizes public peace," said Pawar.

After another slew of stone-pelting incidents in Amravati, the local administration suspended internet services for the next three days, starting 10 PM on Saturday.  A four-day curfew has also been imposed to maintain law and order in the city. Police have also imposed section 144 to restore law & order, urging people to maintain calm.

BJP had allegedly imposed a shutdown or bandh protesting the violence when a mob of 8000 people resorted to stone-pelting at the police while protesting the targetting of minority communities in Tripura. As per sources, incidents of stone-pelting, damaging vehicles were reported to which police responded with mild lathi-charge. Some people opposing the BJP's bandh had taken to the streets hurling stones at shops shutdown during the bandh.

On Friday, the Raza Academy organised sit-in protest in Nanded protesting against the violence in Tripura, which turned violent. As per Nanded SP, over 8,000 people gathered outside the collector's office demanding that atrocities against minorities in the northeastern state be stopped. As some  youths from the procession started going towards mixed residential areas but were stopped by the police. Enraged, they allegedly reorted to stone-pelting in 3-4 locations in the district to which Police responded by lathi-charge. 7-8 Police officials have been injured, while the police have urged the people to remain calm as perpetrators were being booked. The protests were against the communal clashes which happened in Tripura where few shops, houses were attacked in response to the anti-Hindu clashes in Bangladesh.