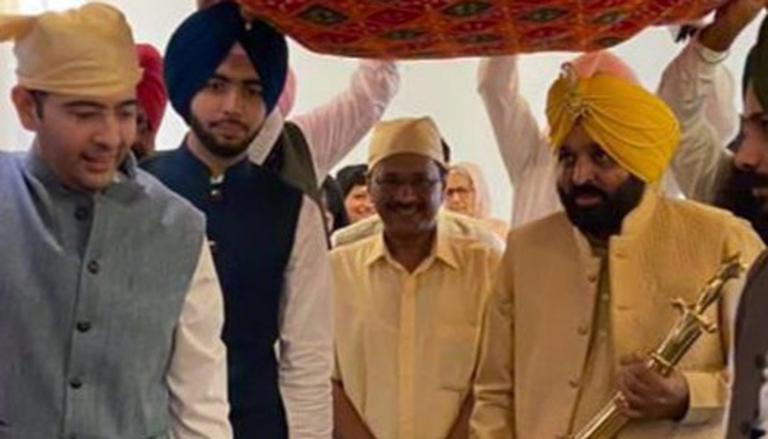 Taking to Twitter, Delhi CM Kejriwal said, "Wishing Bhagwant Mann and Gurpreet Bhabhi a very happy marriage. May God keep you both very happy and give you all the happiness in the world."

Earlier in the day, while speaking to the reporters, Arvind Kejriwal said, "He is embarking on a new journey today. I wish him a happy married life."

Tight security arrangements were in place at the CM's residence, where a private ceremony was held without the usual crowds in any grand Indian wedding. In the wedding images shared by Raghav Chaddha, CM Mann was seen in his regular yellow turban and a gold-coloured kurta-pyjama, with party chief Arvind Kejriwal and other guests.

This is the 48-year-old Punjab Chief Minister's second marriage. He was divorced from his first wife Inderpreet Kaur in the year 2015, with whom he has two children. Both his son and daughter are residing in the USA along with their mother. His 21 year old daughter Seerat Mann and17 year old son Dilshan Mann had visited India on March 16 this year to attend their father's swearing-in ceremony. Dr Gurpreet Kaur, his current wife, reportedly helped Mann during his campaign for the Punjab Assembly election.

AAP MP Raghav Chaddha also arrived at the wedding ceremony along with his mother and wished the newly wed Punjab CM all the happiness.