In an embarrassment for the Congress-led tie-up in Assam, its Tamulpur candidate Rangja Basumatary joined BJP in the presence of Union Minister Narendra Tomar.


In a big embarrassment for the Congress-led Mahajot alliance in Assam, its Tamulpur candidate Rangja Basumatary joined BJP in the presence of Union Minister Narendra Singh Tomar. Basumatary had filed his nomination as a candidate of the Bodoland People's Front from Tamulpur, one of the seats going to the polls in the third phase of the Assam Assembly polls. The speculation started on Wednesday when Assam Minister Himanta Biswa Sarma tweeted that Basumatary had expressed his desire to join BJP and "retire" from the election.

However, the BPF candidate was reportedly untraceable since the morning of March 31. Addressing a press briefing earlier in the day, Lok Sabha MP Manish Tewari called upon the Assam government and BJP to reveal his whereabouts. Moreover, he demanded that the EC should conduct a thorough probe into the matter. While Basumatary cannot technically withdraw from the poll fray, he urged people to vote for Leho Ram Boro, a candidate of the United People's Party Liberal- an ally of BJP. Reacting to this development, Tewari mocked BJP for relying on repeatedly engineering defections before and after the polls. 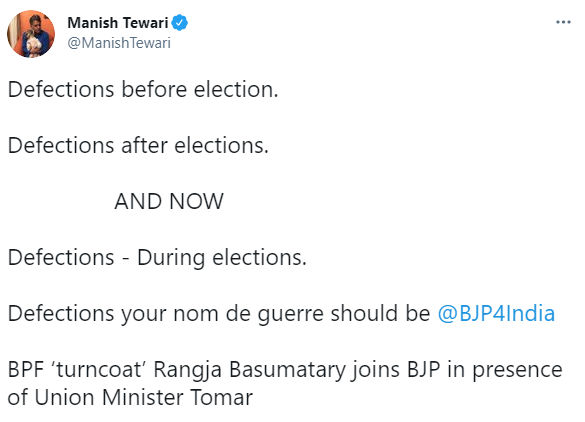 Congress-led Mahajot candidate from Tamulpur constituency, Rangja Basumatary (Bodoland People's Front ) was made to disappear. Assam govt's & BJP's responsibility to answer where he is. Demand from EC that a probe should be done in this matter: Manish Tewari, Congress in Guwahati pic.twitter.com/j9vCS7rm2S

The 15-year tenure of Tarun Gogoi as the Chief Minister of Assam came to an end in the 2016 Assembly polls with BJP winning 86 seats as against 26 seats won by Congress. In a blow for BJP in the lead-up to the upcoming Assembly election, its ally BPF decided to join the Congress-led alliance. While BJP is contesting 92 seats, it has allocated 26 and 8 seats to Asom Gana Parishad and the United People's Party Liberal respectively.

It has refrained from announcing incumbent CM Sarbananda Sonowal as the CM candidate, leading to speculations that Minister Himanta Biswa Sarma might be another contender for the post. On the other hand, Congress has formed a grand alliance with BPF, AGM, AIUDF, CPI, CPI(M), CPI(ML), RJD and JPP. While the voting in the second phase is underway at present, the polling for the last phase is scheduled for April 6. While the polling time has been increased by one hour, there will be 33,530 polling stations. The counting of votes will take place on May 2.

READ | In Assam, Badruddin Ajmal replies to Shah's infiltrators remark; 'how many sent till now?'