As BJP chief JP Nadda summons Bengal party chief Dilip Ghosh to Bengal, Ghosh on Monday, said that some leaders are depressed and don't know what to speak. 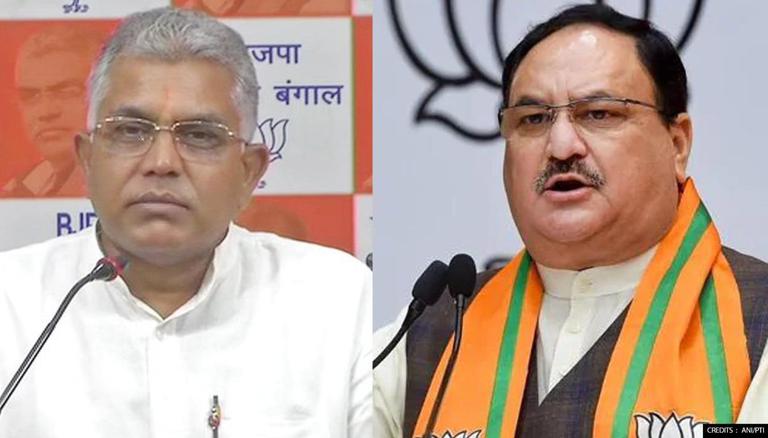 
As BJP chief JP Nadda summons Bengal party chief Dilip Ghosh to Bengal, Ghosh on Monday, said that leaders who are talking publically of disappointment in BJP are depressed and don't know what to speak. Ghosh claimed that the party had no issues and that those speaking against it were depressed and did not know what to speak. Ghosh, who is currently in Delhi, is likely to meet Nadda on Tuesday.

Ghosh: 'People are disappointed, don't know what to speak'

"It's not a party problem, it's a personal problem. Even today many karyakartas are working to take the party forward. Few leaders have become depressed and are expressing their disappointment to the media. People are depressed and don't know what to speak. In our party's culture, we listen to everyone but it need not be told publically," said Ghosh to ANI.

Grumblings of disappointment have been plaguing the saffron party since the exit of Mukul Roy with many BJP leaders blaming the party for fielding too many turncoats. Recently, BJP MP Saumitra Khan resigned as BJYM chief on Wednesday only to rescind it hours later. Khan took to Facebook to allege that LoP Suvendu Adhikari was taking all the credit for BJP's achievements in Bengal. Khan who switched to BJP from TMC in 2018, is currently the Bishnupur MP and has assured that he will remain in BJP.

READ | 'He is my younger brother': Suvendu denies tiff with Soumitra, Ghosh to meet JP Nadda

Taking to Facebook, Khan also lashed out at state BJP president Dilip Ghosh alleging that he did not understand what happens in the party. As per ANI, senior party leaders including Union Home Minister Amit Shah intervened and assured to look into Khan grievances, which made him rescind his resignation. Incidentally, four MPs from Bengal have been inducted into the new Modi cabinet - Shantanu Thakur, Nisith Pramanik, John Barla, and Dr. Subhash Sarkar.

READ | Dilip Ghosh slams turncoats returning to TMC: 'It's hard for them to adjust to BJP rules'

Ghosh chalked up Khan's tirade as resentment due to Adhikari's rise in the party saying, "Suvendu had enjoyed power in TMC before joining the BJP. Now he is cornering other leaders in BJP. Old and loyal members are bound to get upset."

He added, "The party had pasted bark of other trees on itself which is now coming off. New entrants in the saffron party were finding it difficult to adjust to BJP's rules and regulations, so they are leaving. But old-timers, as such, face no such problems". Mamata Banerjee managed to halt the BJP juggernaut, retaining Bengal with TMC winning 213 seats whereas BJP could win in only 77 constituencies.