On Sunday, Congress general secretary Priyanka Gandhi Vadra alleged that the Bhartiya Janata Party (BJP) was harassing Hardik Patel on purpose. The Congress leader stated that Patel fights for the 'rights of farmers' and 'raises voice' for the ordinary people of the country and BJP was terming all of this as 'sedition.'  Congress leader, Hardik Patel is currently under judicial custody till January 24 after having been arrested a day earlier for not appearing for a hearing in his case. 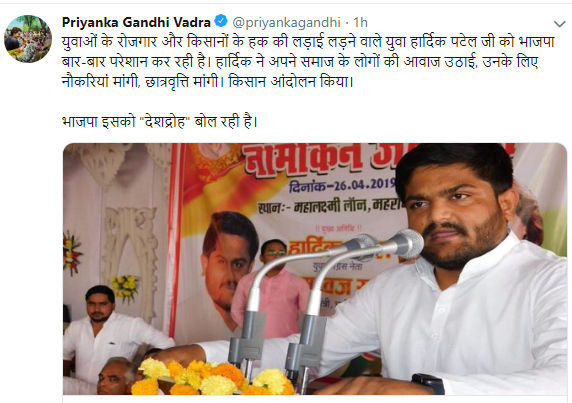 "BJP is repeatedly harassing Hardik Patel, who fights for the rights of farmers and employment for youths. Hardik has raised voice for the people in the society, asked for jobs for them, demanded scholarships for them. Launched farmers' movement. BJP is terming all this as anti national," said Priyanka Vadra in a tweet.

Hardik fails to appear before court

After Congress leader Hardik Patel was arrested for failing to show up at his trial, he was produced at Magistrate Ganatra's residence who remanded him into judicial custody till January 24. Congress leader from Gujarat Hardik Patel was arrested by the Ahmedabad police from Viramgaam on a non-bailable warrant. The summons of the court were in connection with his 2015 sedition case. Patel was granted bail in July 2016; however, the court had framed charges against him and other accused again in November 2018.

In 2015, Hardik and his aides, who were part of the Patidar Anamat Andolan Samiti (PAAS), were allegedly involved in inciting the Patel community youths to resort to violence as part of their conspiracy to put undue pressure on the government to accept their demand of reservation to their community under the OBC category.  Inflammatory messages and rumors on part of the accused resulted in large-scale riots across Gujarat, which forced the police to impose curfew in several parts, as people resorted to stone-pelting, arson and damaging public property for almost four days, the charge sheet alleged.