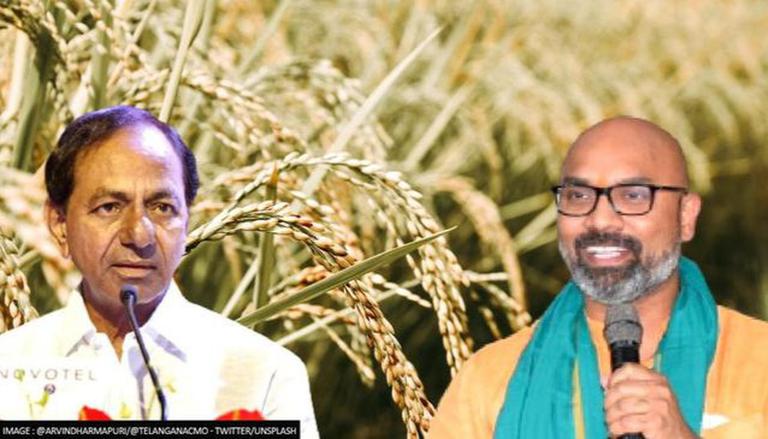 
BJP MP Arvind Dharmapuri unleashed a scathing attack on Telangana Chief Minister K Chandrashekar Rao and his son KT Rama Rao on Monday, alleging a "scam worth thousands of crores" in paddy procurement and requesting the Centre to initiate an inquiry and take necessary action.

Dharmapuri, speaking at the Lok Sabha's Zero Hour, said the state's farmers were in horrible shape, and that between 2014 and 2020, 416 farmers committed suicide in Siddipet, the chief minister's home district.

"Modern rice mills are minting money (with procurement) at Rs 400 per quintal. The scam of thousands of crores is being run under the supervision of the son of the chief minister of Telangana. I want the Central government to investigate the entire scenario and take necessary action," the BJP MP added.

Centre sticks to its stand on paddy procurement from Telangana

On Friday, December 3, in response to a question from TRS floor leader K Keshava Rao in the Rajya Sabha, Union Food and Public Distribution Minister Piyush Goyal had stated categorically that the amount of raw rice that the Centre was willing to purchase during the Yasangi season could not be determined until the Vaanakalam procurement was completed. TRS members had walked out of the Upper House after being dissatisfied with the Union Minister's response.

Goyal had claimed that the state government was not keeping adequate records and not supplying rice in accordance with the agreement, despite TRS MPs claiming that the Centre was not providing clarification on the procurement of parboiled rice.

The Union Minister said the Telangana government was procuring paddy directly from farmers, storing and distributing the procured Custom Milled Rice (CMR) under the National Food Security Act (NFSA), and other welfare initiatives. Only the surplus CMR was delivered to the Food Corporation of India (FCI) for central pool account for supply to other States after covering the State's demands.

(With inputs from ANI, Image: @ArvindDharmapuri/@TelanganaCMO/Twitter/Unsplash)