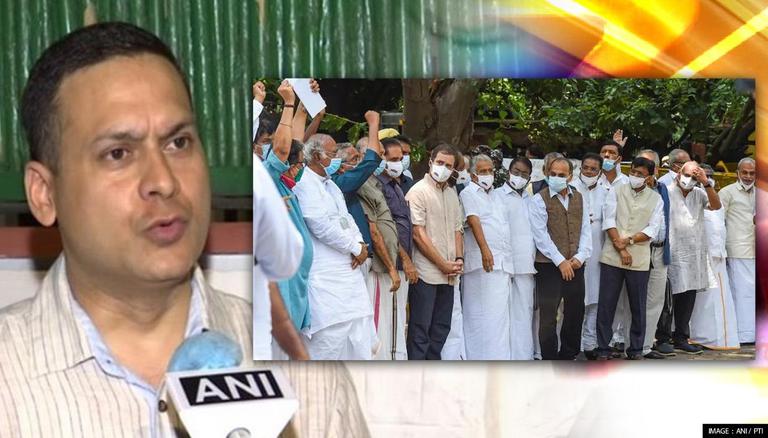 
As India celebrates 'Constitution Day', BJP on Friday, slammed 14 Opposition parties for boycotting the celebrations held at the Parliament's Central Hall. Taking to Twitter, BJP I-T chief Amit Malviya claimed that the parties has insulted the father of the Constitution - Dr. BR Ambedkar, contrasting it to late PM Jawaharlal Nehru's birth anniversary. On November 26, 1949, the Constituent Assembly formally adopted the Constitution of India which was then enforced on 26th January 1950.

Congress, which created a big hue and cry during Nehru’s birth anniversary program, is leading the boycott.

This is an insult to Dr Ambedkar.

He added, "Congress never acknowledged Dr Ambedkar’s legacy and rise. Babasaheb was given Bharat Ratna in 1990 and his photo was put up in the Central Hall of the Parliament, decades later, under a non-Congress Govt. Parties like Congress, SP boycotting Constitution Day are anti-Dalit".

"BJP leaders want to celebrate ConstitutionDay in Central Hall with all solemnity and respect to Constitution of India. It is a mockery to do so when they don’t follow it on the ground," said Memon. Batting for states' rights, Raut said, "Whole opposition party have boycotted the event and they (BJP) are doing drama. People & states rights have been crushed".

Slamming BJP, ex-UP CM Mayawati said, "Centre and state govt have not made any laws for them. They are not following the constitution. They have no right to celebrate. They should apologise".

India's 72nd Constitution Day is being celebrated in the Central Hall of Parliament House. The occasion will be graced by Vice President M. Venkaiah Naidu, Prime Minister Narendra Modi, Lok Sabha Speaker Om Birla, Ministers, MPs and other dignitaries. A large number of people are expected to participate in the mass Preamble reading

Prime Minister Narendra Modi will address the Constitution Day programme at Central Hall of Parliament and will also inaugurate the Constitution Day celebrations organised by the Supreme Court at Vigyan Bhawan. Notably, all judges of the Apex Court, Chief Justices of all High Courts and senior-most puisne Judges, Solicitor General of India and prominent members of the legal fraternity will mark the gathering on Constitution Day. The event was first observed in 2015 under PM Modi's first tenure as he sought full recognition of the significance of the historic event.