Congress president Sonia Gandhi on Wednesday appeared before the Enforcement Directorate for the third time in connection to the National Herald case. 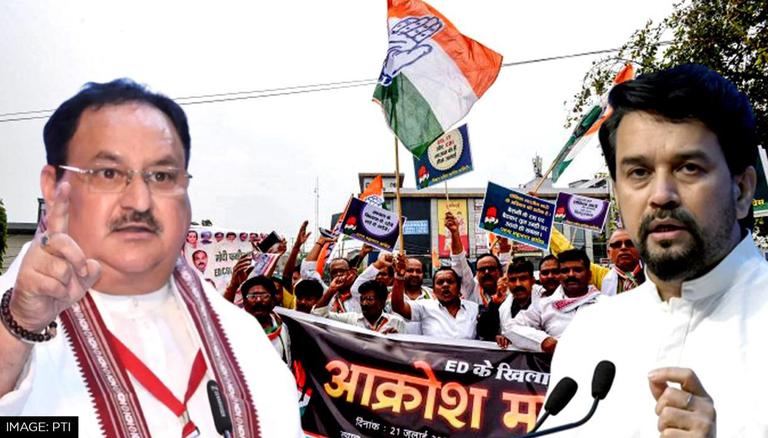 
As Congress continues to stage massive protests across the country after party chief Sonia Gandhi on Wednesday appeared before the Enforcement Directorate for investigation in the National Herald case, the Bharatiya Janata Party (BJP) lashed out at the grand old party for attempting to "hide the truth". Speaking to ANI, BJP national president JP Nadda took a jibe at the Congress' 'Satyagraha' and said that the workers are protesting to "protect a family".

"Gandhis require to answer the investigation agencies, but they think they are bove the law," Nadda said.

"Supreme Court has upheld the PMLA and jurisdiction of ED. The law is taking its course & the Congress party's attempt to keep one family above the law will not work. We must respect the law of the land," the Bharatiya Janata Party national president added.

#WATCH | Congress protests not 'Satyagrah', but an attempt to hide the truth. They are protesting to protect a family, not the country. Gandhis required to answer the investigation agencies, but they think they are above the law: BJP President JP Nadda pic.twitter.com/ump5p9K8Ff

On the other hand, another BJP leader and Union Cabinet Minister Anurag Thakur while speaking to the media regarding the ED interrogation of Sonia Gandhi questioned, "why there is a fear among the party if they have not done any corruption".

Citing incidents of lawlessness, including incidents of rape and murder from Congress-ruled states, he slammed the Chief Ministers of those states stating that they are camping in Delhi instead of maintaining law and order in their respective states. Further reacting over the Congress allegations of Sonia Gandhi being harassed by the ED, he said, "If they are corrupted then they will need to face the agencies and if not then there is no need for fear".

Congress chief Sonia Gandhi, on Wednesday, July 27, appeared before the Enforcement Directorate for the third time in connection to the ongoing probe in the National Herald scam case. Earlier on Tuesday, she was questioned till late evening.

Concerning the same, while leaders and workers were demonstrating outside the AICC headquarters as well as in several other places, many Congress leaders also slammed the probe.

Rajasthan chief minister Ashok Gehlot through a press conference alleged that the "ED has created a terror in the country",