"It was an instant plan, we did not know that the PM is coming by road," Sirsa wrote quoting Channi, and went on to call him 'lame' on his Twitter handle. 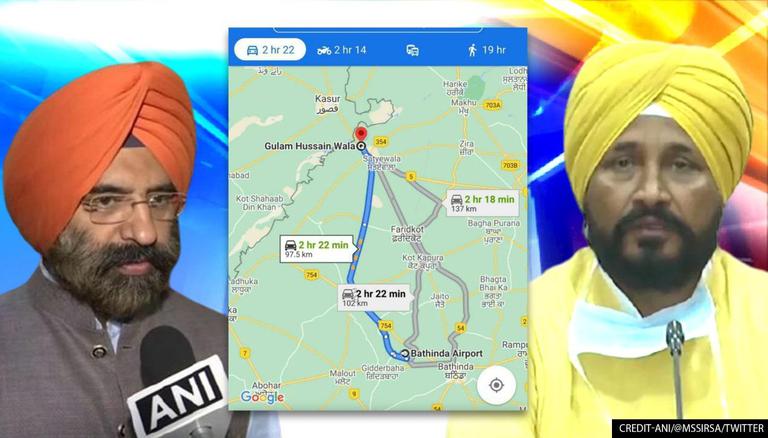 
Dismantling Congress' 'unplanned road trip' claim, Bharatiya Janata Party leader Manjinder Singh Sirsa on Wednesday shared a snip of the roadway of Prime Minister Narendra Modi's convoy from Bhatinda Airport to Gulam Hussain Wala of Punjab. Sirsa pointed out that PM Modi had already been on road and covered over 1 hour 45 minutes of the total 2 hour 22 minutes long journey when his convoy got stuck due to a road blockage.

"It was an instant plan, we did not know that the PM is coming by road," Sirsa wrote quoting Punjab CM Charanjit Singh Channi, and went on to call the Chief Minister 'lame' via his Twitter handle.

In a statement, CM Channi had said, "We had asked them (PMO) to discontinue the visit due to bad weather conditions & protests. We had no information of his (Prime Minister Narendra Modi) sudden route change. There was no security lapse during the PM visit."

READ | Punjab CM Channi claims there was no security lapse; 'wrong to say PM Modi was in danger'

When the security breach took place, PM Modi was headed to Ferozepur to take part in a rally. Also, the Prime Minister was to lay the foundation stone of projects worth more than Rs.42,750 crore including the Delhi-Amritsar-Katra Expressway, four lanes of Amritsar-Una section, Mukerian-Talwara New Broad Gauge railway line, PGI Satellite Centre at Ferozepur and two medical colleges at Kapurthala and Hoshiarpur.

What were the security lapses-

Meanwhile, the Ministry of Home Affairs has released a statement in the incident. "The PM’s schedule and travel plan were communicated well in advance to Punjab Government. As per procedure, they have to make necessary arrangements for logistics, security as well as keep a contingency plan ready. Also in view of the contingency plan, the Punjab Government has to deploy additional security to secure any movement by road, which were clearly not deployed," the Ministry said in the statement.

The Ministry taking cognisance of this serious security lapse, has sought a detailed report from the state government. The Punjab government has also been asked to fix responsibility for this lapse and take strict action.