'Disruption over debate': Centre Releases Footage Of RS Ruckus Which Led To Suspension Of 12 Opposition MPs

Union Parliamentary affairs minister Pralhad Joshi on Sunday, released the Rajya Sabha TV footage of the ruckus which led to the suspension of 12 RS MPs 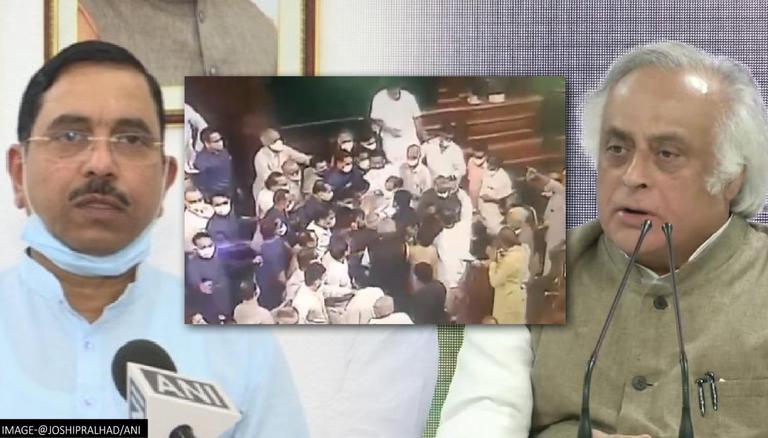 
Escalating the fight between Opposition and Centre over the suspension of 12 MPs, Union Parliamentary affairs minister Pralhad Joshi on Sunday, released the Rajya Sabha TV footage of the ruckus which led to it. Naming Congress MP Jairam Ramesh, Joshi rued over the Opposition's refusal to apologise for its unruly behaviour. He added, "To err is human but to repeatedly justify it is foolish".

As People's representatives, it is the duty of Parliamentarians to respect the Chair & behave in a manner worthy of their standing. However Mr @Jairam_Ramesh, your colleagues chose disruption over debate. It was unfortunate as the whole country witnessed their sheer hooliganism. pic.twitter.com/Nj66fqUCob

On November 29 - first day of Winter Session - the Rajya Sabha suspended 12 members on the grounds of indiscipline, referring to the ruckus that had been caused during the Monsoon Session of the Parliament. The 12 MPs - CPM's Elamaram Kareem, Congress' Phulo Devi Netam, Chhaya Verma, Ripun Bora, Rajamani Patel, Syed Nasir Hussain, Akhilesh Prasad Singh, CPI's Binoy Viswam, TMC's Dola Sen & Shanta Chhetri, Shiv Sena's Priyanka Chaturvedi & Anil Desai were suspended for the ruckus they did in the previous session. The opposition has issued a joint statement calling the move 'unwarranted' and 'undemocratic'.

Earlier on August 11, during the last day of the Monsoon Session, a massive ruckus occurred in Rajya Sabha with Opposition parties accusing marshals of manhandling women parliamentarians in the Upper House. The MPs climbed on the officials' tables, waved black cloths and threw files at the Chair in protest. Objecting to the presence of security personnel during the passage of the General Insurance Business (Nationalisation) Amendment Bill, 2021, the opposition staged a walkout. According to Leader of Opposition Mallikarjun Kharge, the number of marshals present in the Rajya Sabha exceeded the number of MPs and lamented that women are unsafe even in Parliament. Rajya Sabha TV's feed was cut amid the ruckus, adjourning the Upper House sine die.