Congress Spokesperson Randeep Surjewala, on Saturday, stated that the grand old party was in favour of the construction of Ram Temple, after SC's verdict

Accepting the Supreme Court's unanimous verdict on the Ayodhya case, Congress Spokesperson Randeep Surjewala, on Saturday, stated that the grand old party was in favour of the construction of Ram Temple, at a press briefing. Taking a jibe at the BJP, he added that the unanimous verdict closed the doors for the saffron party to politicise the issue. He also stated that the verdict open doors for constructing the temple at the then-disputed land.

Randeep Surjewala, Congress on #AyodhyaVerdict: Supreme Court's verdict has come, we are in favour of the construction of Ram Temple. This judgement not only opened the doors for the temple's construction but also closed the doors for BJP and others to politicise the issue. pic.twitter.com/N1qr6FD1We 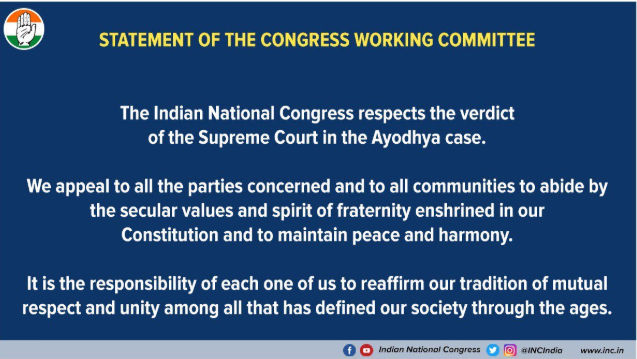 READ | Ayodhya Verdict: Disputed land to be given to Hindus, holds SC

Pronouncing the landmark judgment in the Ayodhya dispute case, the Supreme Court on Saturday, delivered a unanimous judgment in the title suit of the disputed area awarding it to the Hindu parties for the construction of a temple. It also directed the Centre to come up with a scheme within three months to set up a trust which will hand over the outer courtyard and inner courtyard of the site for construction of a temple. Apart from this, the SC stated that an alternate land of 5 acres is to be allotted to Muslims for the liberty of constructing a mosque, either by the central govt or the State govt, in a suitable and prominent place in Ayodhya. CJI Ranjan Gogoi, while delivering the unanimous judgment, dismissed the claims of the Sunni Central Waqf Board and the Nirmohi Akhara. He also termed that the three-way division of the disputed land by the Allahabad HC in its 2010 verdict is wrong.